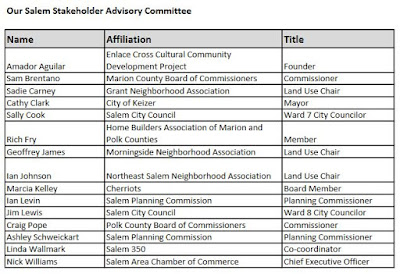 Earlier this month the City announced the initial appointments to the Advisory Committee for the update to the Comprehensive Plan. Soothingly named "Our Salem," the process offers an initial committee that may offer more tension than unity, and shows an odd, even over-broad, sense of "ownership" for Salem.

Over on FB there is already a conversation about this, so there's not much new here to say. But maybe just to amplify concerns that the project already looks compromised from the start?
Sure there's a need to have diversity and some debate on the committee. But is this set up with the right diversity and for the right debates?

The committee's composition looks like something designed for gridlock and the status quo. It doesn't look very productive.

But its composition looks like it might be intended to produce something extra. One way of looking at the odd composition is to note the number of people who also sit on the SKATS Policy Committee, who have for several years resisted any kind of greenhouse gas assessment or scenario planning. Is this "Our Salem" process actually a way to do what SKATS has refused to do? There may be some subtext or other maneuvering going on here.

It also seems worth noticing that while this committee just appeared fully formed as announced, the committee for the Crosswalk Committee will have a process and recruitment.

Why didn't Our Salem have a similar announcement and solicitation?

Strong Towns has a series right now on a failed planning update in Austin, and it might be useful reading. You don't have to agree with all the details and argument to find it valuable.
And just as a footnote, on the Council "administrative purchases" list for Monday, the Fregonese Associates contract for "Our Salem" is listed at $ 197,045.

It's early here to have very much to say about the process for "Our Salem," but as first impressions go, it's not auspicious.
Posted by Salem Breakfast on Bikes at 12:01 PM