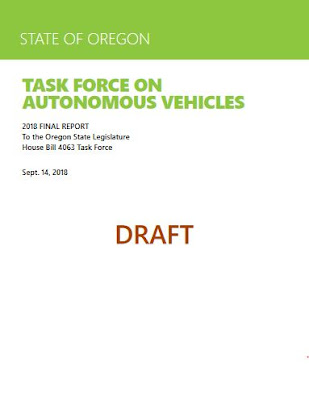 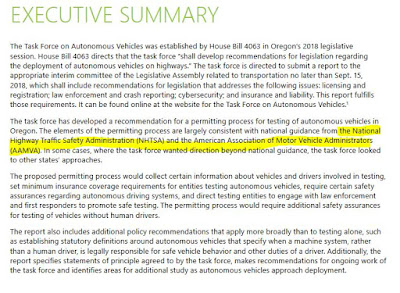 The Task Force on Autonomous Vehicles has published their draft Report and will present it at a meeting on September 10th.

This is not something we've been following closely here, and it will be very interesting to hear what others have to say on it. Last month the Safe Routes to School team remarked they had some concerns:


The National Partnership has been monitoring the AV Task Force activity and provided testimony during this most recent meeting. We thanked the Task Force for its leadership in this very important conversation for our state, and we also asked for them to hold an in-depth discussion on how this emerging technology could and should impact our most vulnerable and at-risk populations. We believe this conversation needs to happen sooner rather than later, to ensure we avoid furthering economic, safety and health disparities for our communities.


Given that the first round of Task Force Agenda and Memorandi are now appearing…there are deficiencies which show the void of not having all the important players at the table. The Pedestrian/Bicycle/Vulnerable Road user viewpoint is missing in every material packet presented on the ODOT website.

Indeed, the report seems to follow recommendations from pro-industry groups, and does not appear to have a sufficiently critical perspective. Crucially, safety for people not in cars is hardly mentioned. It looks like at least a partial instance of regulatory capture by cheerleaders for a nascent industry, and concerns raised by Safe Routes and a former Chair of OBPAC do not seem to have been addressed very robustly, if at all.

There is also reason to think Robot Cars won't reduce the amount of vehicle travel but will induce more. A recent study (here at the Washington Post and at Slate) found that drivers roaming without a fare greatly increased total travel:  "Schaller projects services like Lyft and Uber put 2.8 new vehicle miles on the road for every mile of personal car travel they remove." When we think about a personal commute, there is the drive to work, car storage time, then the drive home: An out-and-back loop. With a Robot Car, the temptation will be chauffeur to work, send the car home, hail the car, chauffeur back home. That's two loops where once there was but the one. Some may be willing to share a Robot Car with others either sequentially as a ride rental, or concurrently as a carpool, but many will want the exclusive pleasures of the solo chauffeured ride. Pricing the use of Robot Cars correctly will be important, and it's not clear incipient regulatory schemes are prepared for this.

Previously:
As others publish comment on the draft report, this post may be updated.
Posted by Salem Breakfast on Bikes at 5:00 PM