In the middle of all the war headlines, just a few days before Labor Day, on August 30th IWW founder Bill Haywood's sentencing for sedition got big placement also. Labor might be celebrated, but only as it could be directed, managed, and expressed in authorized modes.

With Fourteen Other Leaders Must Serve 20 Years In Federal Prison And Each Pay a Fine of $20,000. - Others Draw Sentences As Low As Ten Days In Jail

Chicago. Aug. - Fifteen leaders of the Industrial Workers of the World, including "Big Bill" Haywood, today were sentenced to twenty years in federal prison and to pay fines of 20,000. They had been convicted on four counts charging sedition and obstruction of America's war program. Others of the 97 defendants drew lighter sentences.

It's hard sometimes to grasp the depth of feeling against the wobblies, but some of the reactionary populism and the ways it used patriotic symbolism might rhyme today.

Here the Loyal Legion of Loggers and Lumberman was positioned as the patriotic alternative to the IWW.

Today's a good day to revisit Kimberly Jensen's piece from the Summer 2017 Oregon Historical Quarterly, "Women's Positive Patriotic Duty to Participate: The Practice of Female Citizenship in Oregon and the Expanding Surveillance State during the First World War and its Aftermath." 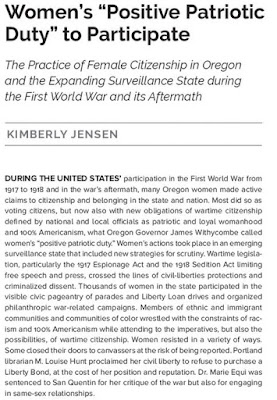 The piece is fascinating because it is about a great moment of ambivalence and ambiguity: Women had got the vote in Oregon, though not yet nationally, and were exercising new forms of citizenship, but they were also participating in the expansion of the surveillance state and grappling with racism. There are several other dimensions as well, with steps forward and steps backward, resistance and embrace. Nothing is simple in this moment.

Though she draws most of her examples from Portland, we see most everything here in Salem as well. Between the positive expectations in social norms and punishment in expanding definitions of crime, we see the same narrowing. Scrutiny was everywhere.

The "loyalty cards" are a little disturbing, but it may be that social media and the vast amount of information we hand it, allow the dossiers Big Data compiles to be even more detailed and invasive.


The Saturday Society Columns clearly show the ways that new social expectations and pressure to conform was shaped around nostalgia, patriotism, and the war aims. They also discuss the reservoir of unpaid work and new leadership opportunities that intensified during the war, especially for women. (There are lots of interesting things going on in them!)


As the last days of June slip away, one who is reminiscent cannot hinder his [thoughts] from drifting back to the June days of former years. They were superfluously filled with gay parties and outings, which we entered upon only to while away the summer hours. People vied with each ether in planning original excursions for one another's amusement. Then, people followed the call of the wood lands and were allured by little nymphs of pleasure to the rivers and forests.

The idle moments were spent reading sentimental novels or embroidering intricate designs on linens, which, by some, were to be put away in the cedar hope chest for future years. How foolish and old-fashioned it seems now to devote so much of one's time in this way! Now the people feel a call to the country, but in a different way - that they may combine work and pleasure in their enthusiastic patriotism to accomplish national ideals. The practical application of the mighty aims that are sweeping over the country as seen in the groups of people, who have always been popular in society circles, flocking out to the farms, offering their assistance during the season when Oregon's fruits are ripening so fast. And even some of the clerks and business people are taking advantage of the long summer evenings to do their "bit" after their regular hours of work. This new impetus to help in the country fields on the part of the people combined with the faithful work of so many women, who have been devoting numberless hours to Red Cross work, reveals the change that has change into the [thoughts] and pleasure of everyone. And though we know that the June days of 1918 are unlike the memories of former years, everyone feels a sensation of pride, instead of regret, at the worthy ideas that have permeated all types and dispositions of people.


The past week has been a very quiet one as far as social affairs are concerned. It is not that people are growing less hospitable, but more patriotic that social calendars are so sparsely filled. Everyone still has the desire to entertain but she realizes that at present it is more unselfish to spend ones time in war work. There are so many kinds that one has no difficulty in selecting something suitable to her individual tastes. For those who enjoy the country and out door life there are jolly camping parties who go to the Loganberry fields.

Then for those who can spend only part of their time there is Red Cross work, knitting parties, which form the double purpose of assisting in war needs and of bringing friends together for happy afternoon.

Years ago our grandmother used to travel to each others homes in their high old fashioned coaches to spend tho afternoon at a knitting or quilting "bee." There is a certain charm about those parties as we read the stories and see pictures of these happy women. The memories of these simple, but enjoyable, parties have been handed down to us so that it is really a modern outgrowth of this custom which we are following in our gatherings to do knitting, or other Red Cross work.

I have no real conclusions here, but as we consider the problems we face in 2018, there are ways that the problems of 1918, and the solutions they seemed to find best, are worth a closer and comparative look.
Posted by Salem Breakfast on Bikes at 11:00 AM