For some this is now old news, but if you don't follow the bike shops and bike clubs, you might not have heard that earlier this week Bike Peddler reported that their founder, and a pillar of Salem bicycling, Joe Dobson, had died.

A few days ago from the Peddler:


Joe Dobson, the founder of Bike Peddler, passed away in the morning surrounded by his family and friends.

A celebration of life ceremony will take place in the coming weeks. Details to follow. In the meantime, we find ourselves swapping stories, laughing at tall tales of mischief, and reflecting on all the ways Joe touched our lives and this community at large. Since opening the shop in 1974, Joe’s love for cycling and getting people out on adventures has been infectious and unwavering. Help us honor his memory by grabbing your bike and getting out there today with friends, loved ones...heck, perhaps even strangers...because nothing unites us like the revolution of a pedal and wheel.


He had been in the hospital for about a week due to a fall from a ladder where he broke all ribs on one side and about 1/2 on the other side. As you probably know, he had been in poor health for several years due to stomach cancer.

In 2014 Salem Weekly had a nice feature on him.


A college job in a bike shop told Joe Dobson it was a line of work he would enjoy. His first impression of the city of Salem was favorable. Dobson joined the two together, and it has resulted in 40 years of owning one of our premier bicycle and cycling accessory stores, the Bike Peddler on Commercial Street NE, and influencing the town for the better. 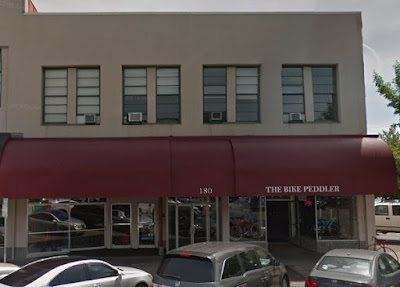 So as we observe the Days of the Dead, tip your cap, say a prayer, have a drink and offer a toast, best of all, as the Peddler suggested, grab your bike and take a ride, however you honor the departed, take a moment to recognize Joe and the shop he created, the Bike Peddler.
Posted by Salem Breakfast on Bikes at 12:30 PM