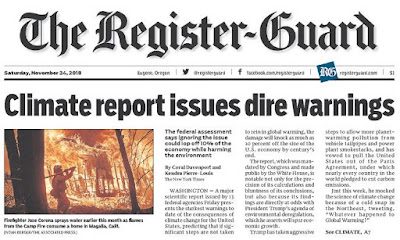 Monday Council meets, and they'll be talking about two big transportation ideas, what do do about the Salem River Crossing and whether to continue to work on renewing commercial passenger air service at the airport.

Separately, on Friday in a colossal news dump, the government released a report on Climate Disruption. The SJ was silent on that, but it made the front page in Eugene on Saturday.

Council can commission another study, and developing a Climate Action Plan is a reasonable and important thing to do.

But if commissioning that study is merely another substitute and deferral for real decisions, many of which will necessarily involve renunciations, then that's no substantive action and a charade only.

Council should lead by saying NO decisively to the Salem River Crossing and to subsidies for new Commercial Air Service. We need to start doing things now we are pretty sure will be necessary - even if we don't have a funded study that "proves" the wisdom of the action. We know the transportation sector is a huge source of greenhouse gas and is the one sector in Oregon that's not declining. How much more "proof" do we need?

(Previously, the letter at the MPO prompting this Council action. The comment from Cherriots' representative on the MPO committee is salutary, and Council should refer to it.)

In today's Sunday paper, there are several items that obliquely touch on these and related matters. The debate on decongestion pricing for Wilderness areas is particularly of interest, and maybe successful framing will emerge that we can apply to decongestion pricing on roads. But more distressing and lethal are the impacts of Climate Disruption


There's a proposal to purchase time travel reader devices: "The project will install Bluetooth or Wi-Fi Travel Time Reader devices along regionally significant corridors in the Salem-Keizer area to estimate the travel time of vehicles." As I read it, this data then could be used on reader boards later, like on the Bridges.

But, you know, it's also Big Data, and you may have privacy concerns. Who will have access to the data, how identifiable will individual bluetooth or wifi devices be? The contract is with ODOT, and no other parties are mentioned outright. But who provides the devices, and will City of Salem IT be the sole owners of the data? This might be useful, but it's another instance of surveillance capitalism that might make us queasy also.

The City's quest for funding on the McGilchrist corridor between 12th and 25th continues. A Council/URA item asks for $110,000 in urban renewal funds for more design work. In the Staff Report was also news that the City was not successful (see previous notes here) in getting a TIGER grant:


A total of $1,480,000 of McGilchrist Urban Renewal Area funds have been allocated to develop design plans for the McGilchrist Street Improvement project. These plans were used as part of the City’s application for the federal TIGER grant program and other federal funding opportunities. While the project was unsuccessful in securing TIGER funds, the project was granted $4.5 million of Salem-Keizer Area Transportation Study funding to purchase and acquire the right-of-way and easements necessary to complete the McGilchrist Street Improvements.

Since the original scope of work was completed, additional tasks were added which require additional funding to complete the preliminary phase of the project

As the TIGER program morphed into the BUILD program, the City retooled and resubmitted. The BUILD program was more autoist and less multi-modal in concept, and this could have design implications. (More on BUILD here when SKATS considered the application.)

CANDO has notes on the new projects for the Downtown Urban Renewal Area, specifically ARCHES/Sobering Center. They are a little dubious.

The weekly City Manager's update has a tidbit on McGilchrist funding, and hopes for an earmark:

"The U.S. Senate is planning to reauthorize the Fixing America's Surface Transportation (FAST) Act, the funding and authorization bill that governs U.S. federal surface transportation spending. The City will be submitting for Senator Merkley’s consideration the McGilchrist improvement project. Senator Merkley will be leading the effort to fund projects like McGilchrist within the FAST Act."