The piece on distracted driving in the paper yesterday mostly missed the primary correlation.

There are more deaths because we are driving more. When we drive less, there are fewer deaths.

But because a broad range of industry and cultural practices demand that we insulate driving itself from fault, insist we celebrate cars and driving as paradigmatic of American Freedom, and instead must find humans and human error at fault, we deflect from the actual causes of roadway carnage and burrow into side matters.

So we get repeated articles, discussions, and hand-wringing over distracted driving.

Distracted driving is indeed a problem, and it should be addressed. But it's not the main thing.

If we really want to make an immediate and lasting dent in our count of roadway deaths, we need to drive less often, drive shorter distances, and drive more slowly.

We don't need a "drive better" campaign, we need a "don't drive" campaign.


You might recall that over at the Vitoria Transport Policy Institute, Todd Litman has proposed a new traffic safety paradigm and criticized "targeted safety programs" because they don't get at system problems. 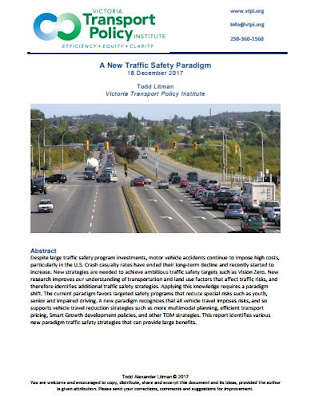