Council Delays Action on the SRC

It's hard to read the tea leaves on last night's Council action.

There's still too much emphasis placed on the problems with financing for the SRC, and not enough attention placed on the ways it's simply a bad idea.

Maybe Councilor Andersen's substitute motion and its January Work Session will flush out more of the ways it's a bad idea and ways that the SRC process has misrepresented or selectively represented things in order to suggest it's a better idea than it really is. Maybe if Council takes charge rather than leaving it to staff, there will be more opportunity for cross-examination and a more serious investigation than the rushed and fake process in late 2016 afforded.

One person transcribed the motion, and it does appear to create room to investigate some areas the SRC process has minimized, elided, or erased:


I move that the Council hold a work session specifically to discuss all potential issues with the Environmental Impact Statement for the 3rd Bridge, including but not limited to it’s affect on neighborhoods, Edgewater Drive, Wallace Marine Park, the Rosemont exit, projected congested areas and travel times under build and no-build options and financing options.

That's a lot of material, though, for one Work Session and then an up-or-down vote on the LUBA remand.

Council could instead cut to the chase and straight-up recommend concluding the EIS process with a "no build" Record of Decision. (A friendly amendment might also be to appoint a new Council representative to SKATS, one who will more faithfully represent Council direction and City interests.)

On the question of finances, there is some uncertainty. As Ranking Member of the House Transportation and Infrastructure Committee, Congressman Peter DeFazio of Eugene is poised to be the new Chair of the Committee.

He's generally lauded as a friend and ally for better transportation policy.


But wait! Maybe he's just as autoist as the rest of them, and will be eager to sponsor a big new transportation infrastructure package in some bipartisan spirit of counterfeit amity. ("Infrastructure week!")

Some recent comments of his on decongestion pricing are concerning. 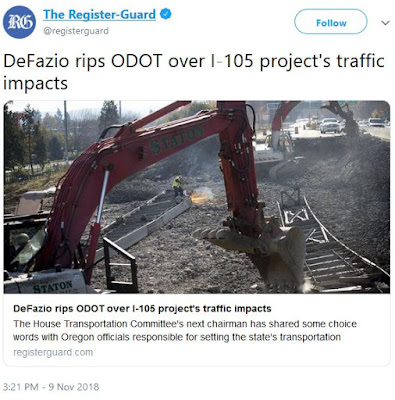 "DeFazio also mentioned in the letter [to the OTC about the I-105 project] his opposition to proposed tolling on congested sections of Interstate 5 and Interstate 205 in the Portland area. The letter served as a follow-up to a Nov. 1 conversation DeFazio had with Baney and another member of the state commission."

Here's part of the letter:

I would have thought he'd be in favor of decongestion pricing. That's not very forward-minded for a transportation advocate.

When you put all these pieces together, it's plausible that the SRC could be included in a new Federal infrastructure bill.

If our current problem with funding were to go away, we should be sure to oppose the SRC because it's a bad idea, not because it would be expensive.

As a footnote, it's interesting to see now the Crabbers are suing Big Oil.


But there remains this big disconnect on a primary end use for oil.

And here's the SJ's treatment. A small tile on the front page with a half-page continuation inside. But it's paired up with a piece on climate disruption here in the Pacific Northwest (and, by the way, farther in, there's a full page, full color ad on red tide research).

The piece is mostly framed up as annoyance with stall tactics on a positive good; it assumes the bridge is a positive good. The conversations on climate and traffic congestion remain siloed. The person quoted about climate is an advocate for a special interest, and is marginalized. At some point we have to knit these analyses.
Posted by Salem Breakfast on Bikes at 12:30 PM

I wish that the SRC would just end, but I can see the wisdom of Andersen's motion. By spelling out the pros and cons I think he feels that the no vote will be clear. The decision should be made on the facts and not the emotions that the other side keeps bring up.

I was disappointed that Mayor Clark thought it a good idea to weigh in on a Salem City Council issue, but even IF and that is a big if in my reading of things, Salem were to move forward with the SRC proposal, it is very unlikely that the voters would support a funding strategy that would increase their taxes and would require polls.

Oregonians are very much opposed to polls as well as sales taxes. To favor either is a sure way to get replaced by the voters.

My guess is that even if DeFazio were to support money for Oregon roads, it would go to Portland for their own river crossing project across the Columbia!

Updated with clip from SJ's coverage.

Susann is right, of course, that the CRC would be the regional priority, but depending on the scope of a package, some SRC bits (or more than bits) could slide in.

But we who oppose the SRC should be cautious about assuming there is no path to funding.

Also! Councilor Andersen has posted on FB an explanation for his motion.

"One of my many arguments against the [hasty action in late 2016] was procedural: that the Council had not had any work session or even any real discussion about the facts surrounding the bridge (as opposed to emotional arguments). Given this fact, how could we realistically make a rational decision on the issue? (In fact, for the entire four years I have been on the City Council there has been no work session or even extended discussion of the facts surrounding the bridge.)....

I moved for a work session precisely because we haven't had one in at least four years. As a result there has been no real public or council education as to the real facts concerning the bridge and its effects on not just the issues in my motion, but on other aspects of the detrimental effect of spending huge amounts of money (est. $430,000,000) on an ineffective, unproductive, environmentally unsound solution that will not solve the problems that it is supposed to solve or alleviate by its construction. These facts are known to folks who have actually read the voluminous record and analyses of the effect of the bridge, but are not well known by the general public. A work session will provide much needed transparency by evincing the actual facts surrounding the bridge."

Regarding the Politico piece, Congressman DeFazio said to Eugene Weekly:

"I will continue to aggressively push for Congress to act decisively and comprehensively to curb carbon emissions and invest in new and existing technologies to free us from dependence on fossil fuels.

It is unfortunate that one very misleading article in the rag Politico has led some like Jim Neu to question my commitment."

Thanks for the DeFazio update - on climate, if not on decongestion pricing, however. EVs are still autos!