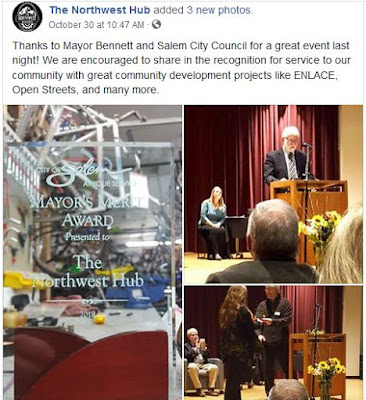 It's nice to see a bike-related enterprise recognized again. Congratulations to the Hub!

(Not so nice is the lack of captions and a press release with each citation in the City's own posting, which is all too meagre for something ostensibly oriented for "recognition.")

With Michael Wolfe retiring and closing South Salem Cycleworks, and with the untimely passing of Joe Dobson at Bike Peddler, 2018 is shaping up to be a real transitional year in our bike shop ecosystem. Scott Cycle also is in the middle of a generational transition, and our bike shops will all be led by an entirely new cohort in very short order.

I don't know if there is any meaning to extract from this. We all age, we all must pass away, and when businesses endure from generation to generation they have successions. It's no great insight to observe the bare fact of change. But it's still something to register.

The bike shop owners who gained maturity in the 1970s bike boom are now yielding to those whose main experiences are from no earlier than the 90s, and often from the early 21st century.

There was a funny piece in the USA TODAY section about tailgating in a parking lot for Halloween.

Apparently this is a thing now.

Strong Towns posted a lengthy critique of it recently.


While activities like Trunk-or-Treat, or even other alternatives such as the increasingly popular “mall trick-or-treat,” offer children the opportunity to have guaranteed fun in a safeguarded environment, the holistic benefits of trick-or-treating which result from neighborhood communities rallying together to create a fun, safe, and memorable experience are being lost. The sad part is that these holistic benefits would continue long beyond the Halloween holiday.

BikePortland today went the opposite direction, arguing that we should extend the "Block Party" or "Open Streets" concept to a new event on Halloween, the "Trick or Treat Street." Going car-free shouldn't require the autoist move with pedestrian displacement systems that shunt activity to the parking lot or retirement home or high school!

Instead, we should close streets to cars and let the kids roam.

And here's the Halloween report from 1918, with news on the destruction of a cabbage patch very near Highland School and assorted other "tricks." 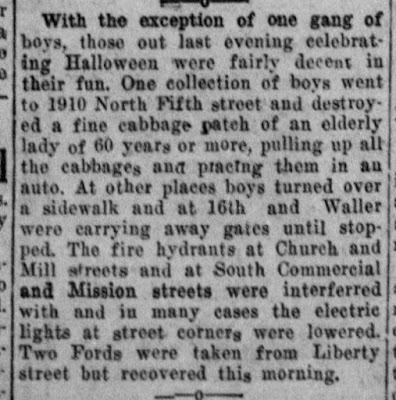 Salem Reporter has an interesting piece about a one-day pilgrimage to the Abbey at Mt. Angel.

It's framed up as a story about religion, but of course it's also a story about walking and transportation. 20 miles is a good hike! And, unlike walking a marathon or some other course, speed is not a central concern. The walk's aims are quite other, and in some senses are anti-speed, a focus on slow travel and Christian mindfulness.

And while the urban streets will have sidewalks, the county roads between cities will have shoulders only and car drivers at highway speed. So it's a safety story also.

All in all it's an interesting instance of walking, and offers different layers of meaning beyond its Christian focus. It will be interesting to follow and see if it becomes an annual event. It would be great to have more walking associated with church activity, which has become dependent on parking lots as our autoism has made for consumer-oriented choice and erased much of the notion of a local parish or neighborhood church.

Finally, at the School District's Crystal Apple gala, Four Corners Principal Phil Decker was one of the winners.

Though it's no longer active, you might remember Decker's blog, "Hiking Salem National Forest," a photo blog of urban scenes of East Salem, often along big, busy stroads.

I never was able to resolve its tone. Was it using irony to show beauty in Salem? Or was it being sarcastic about urban blight? A lot of the entries seemed to trade on both at the same time, or to alternate between them, and maybe that ambiguity is ok.

However you want to interpret them, the blog and photos are a sustained act of seeing in Salem and have value for that.

So congrats to Principal Decker!
Posted by Salem Breakfast on Bikes at 12:30 PM