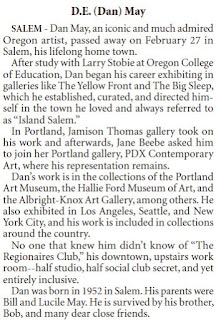 There was another sad obituary in the paper today. Artist DE May died last month.

I would see him on a bike and on foot around town occasionally, and perhaps because I was a stranger and did not know him, having no introduction, but also as he seemed to be a retiring type (and note none of the tributes have photos of him), when I asked to take a photo of him and his bike one day on Chemeketa Street, he declined. He was a notable Salemite who biked, and it seemed like he might have interesting things to say about biking or the city.

Tributes have been heartfelt.

A few days ago over at Hallie Ford Museum of Art they wrote:


Salem and Oregon lost one of their great artists last night when Dan (DE) May passed away from pancreatic cancer at Salem Hospital. Dan was born in Salem in 1952 and attended high school here. He studied for a time with Larry Stobie at Western Oregon University in Monmouth (15 miles west of Salem) but really spent his entire life in Salem. For most of his professional life, Dan worked as a custodian in order to support his studio practice, which finally took off in the 1990s and culminated with him being selected as a Hallie Ford Fellow in the Visual Arts in 2013 and receiving one person exhibitions in New York and Los Angeles the following year. He had frequent solo exhibitions at PDX CONTEMPORARY ART in Portland over the years and was featured in two small solo exhibitions and one large group exhibition at the Hallie Ford Museum of Art. In addition, we have a large body of his work in our permanent collection, some of which is always on view. With Dan’s passing last night, I think the time is right to consider a major retrospective and book for him at the Hallie Ford Museum of Art in the next few years. Dan was truly an “institution” around Salem and one of our genuine “art treasures.” He fought a brave and courageous battle against one of the most deadly forms of cancer and he will be sorely missed. May his memory be eternal.

Less institutionally and more personally, over at On the Way, there's a very lovely and deeply felt tribute. It's got great postal ephemera and hand-drawn maps and so many signs of life.


Dan slipped off the island this week and won’t be coming back. All of us Islanders are bereft, and others in the greater world too. Artist, poet, maker, gatherer, friend.

A retrospective at Hallie Ford Museum of Art would be very interesting. Though the art is severe and abstracted into simpler forms, the gridding and houses suggest it is influenced by urban phenomena and a cartographic sensibility. Maybe this is a misunderstanding, but it seems like a plausible reading. And there's that boat. Transportation! Maybe he even has some bikes in some of his works. In a very brief note, his gallery, PDX Contemporary Art, also mentions a show planned for June of this year.

Though he was not a public figure here, he was a significant artist, and more in Salem outside the art world should know of him.

As the Library works to purge the poetry section, including works by important local writers, it's worth remembering the importance of art, including art we find strange and difficult.
Posted by Salem Breakfast on Bikes at 12:01 PM