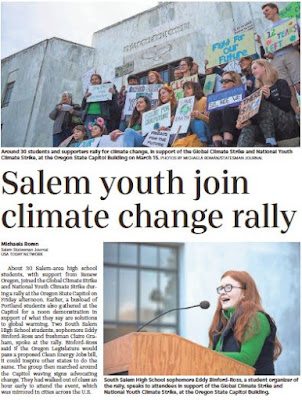 As students around the world and also here in Salem skipped class on Friday to highlight climate disruption, news stories, including talk about a new bridge across the river, continue to be siloed stubbornly from any talk about climate. This is wrong. Many stories now are also climate stories. These might seem like they are mainly about commerce and convenience, or about cultures, transience of beauty, and delight, but they are also about climate.

Of course it was interesting to read a little more about what looks like what might be an emerging consensus about upgrading the crossing at Wheatland Ferry to a full bridge.

On the face of it, this is not at all unreasonable. There is existing demand there. Historically it was considered, and on this latest round it should have been given more consideration during the SRC process (the formal Purpose & Need Statement was written to exclude it from the start). It deserves to be thought through and given a full analysis.
But we can't continue to talk about big new transportation facilities without also talking about greenhouse gases. If a bridge at Wheatland would better serve farmers and freight, what does it do with induced demand and for total emissions?

And in fact, at the State of the County address where the Wheatland Ferry site was discussed, climate disruption was directly invoked - though mainly to negate or disparage it as a problem.

These things have to be un-siloed and knit together.

We see the same problem in today's story about Cherry Blossom Day. February was very cold, and that slowed things down. There were no blossoms to photograph and feature this year.

This should be discussed more. The historic average has been for blossoming to start mid-month. But we've had a string of early springs this decade, pushing blossoming back to the beginning of March. This year we are having late blossoming relative to the trend and new normal.

A history of cherry blossoming dates is an opportunity to talk about trends and the difference between weather and climate. It's a terrific and specific hyperlocal case study that can illustrate some of the issues in climate. (And if you wanted to get poetic, transience is also a theme for climate now.)

Even if you think some of the specific concepts in the Green New Deal employ the wrong policy levers, the overall concept of a tremendous mobilization, like a wartime mobilization, for climate is not wrong.

If we could to it for scraps during World War II, it's time to do the same for climate now.