The City published the posters from Wednesday's Multifamily Housing Workshop, and it's clear now we are talking about "missing middle" housing, the kinds of small plexes that used to be legal during the streetcar era, which we made illegal with exlusionary single-family, "lawn & driveway" zoning during the autoist era.

There's no Staff Report aimed at the public, but there is a very brief technical memo.

Overall, there's not enough discussion and analysis of the proposals. They trade too much on readers and commenters already understanding zoning, construction, and housing issues. They are not, therefore, as persuasive as they might be. Generating real political momentum behind them will require persuading a general audience who will mostly not have any background in development or zoning.

So here are just some quick-hit notes in red on the posters. 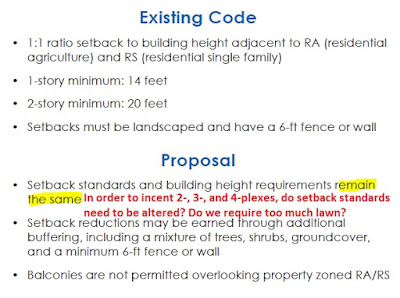 As for setbacks and building heights, here's a discussion of Portland's proposal in the context of displacement. They conclude that lawn/yard area should actually be bigger on four-plexes, that is the total building size smaller than a single family dwelling on the same lot, in order to minimize the prospect for excessive demolitions and displacement. I don't know what is the right approach for Salem, and there is reason to think it would be different, but without more analysis, this just looks random preference for "as little change as possible." Again, the City and consultants should publish a direct analysis supporting this proposal. 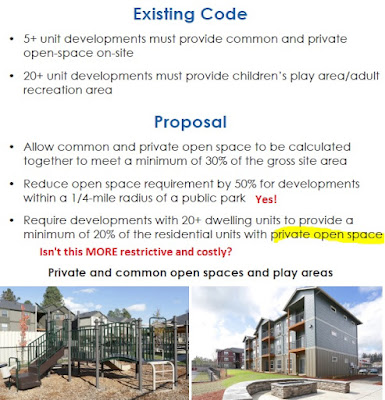 What is this new requirement for "private open space"? Isn't that just a "yard" by another name? That looks like it makes larger apartment complexes add yards? How can this be helpful? This one does not seem obvious at all. 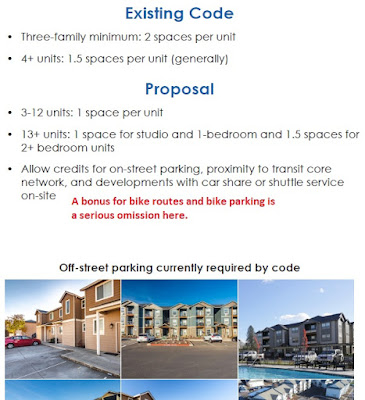 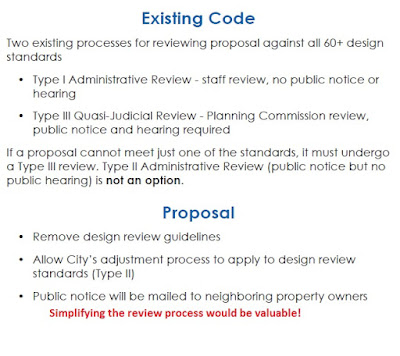 As for simplifying the review process, the City also should cite some case studies. What are actual things developed here that were adversely impacted by unnecessary Type III review? How might they have looked under Type II review?

And then are they proposing to totally do away with Type III review? Like I think it's appropriate the Boise projects have full Type III reviews. Projects where there are significant City subsidy in Urban Renewal funding or other kinds of public funding should go through a more detailed public review.

But there are plenty of other projects where a lesser administrative review is appropriate.

Council could still call things up or appellants could appeal to the Planning Commission or City Council.

Still, I'd like to see more discussion and analysis of this proposed change. The City should flesh this proposal out with a larger set of examples.

In the end, for non-experts, it's hard to think through these proposals and to assess them in an even-handed way. As they are currently pitched to the citizenry, what the City will get are emotional responses that may not connect to actual policy goals.
Posted by Salem Breakfast on Bikes at 7:00 AM

Email ThisBlogThis!Share to TwitterShare to FacebookShare to Pinterest
Labels: EOA-HNA, Our Salem

I have a lot of comments on this subject, but I doubt that you want to hear most of them. I am one of two people still either alive or working for the City...actually no one from the City is still employed by them....who worked on creating the current multifamily design code back in 1993-95.

Some of the things that we thought important back then have been proven to be unnecessary. Others are very important and need to be preserved.

Briefly, parking requirements should be adjusted based on the type and income level of occupants. For example if you are building studio apartments downtown cars aren't needed as much as if you are building for middle class families or upper income couples. The poor tend not to own cars and the well off tend to own more than one or a larger vehicle.

I agree about the need for bike storage and if people are going to be encouraged to commute by bikes they need a safe place to store them.

The process for review could use some consideration. I don't believe multifamily should ever not have a public review. Right now if someone builds within the current design codes, no one knows what is happening until the shovels are digging! That means that if the land is zoned property no notice and no comment and no appeal. Thankfully most land for RM is already built, so it often requires a zone change, so there is a process there.

Also, the new code change is to recommend that all land use applications must now first go to the Neighborhood Association. It is too soon to know if that condition will help.

The type III review is basically the way in which a developer can do something more creative or outside the design code. The problem with it is that once a developer goes that route EVERYTHING is open for comment. This means that the review can include color of paint to siding used. That makes a developer nervous so very few use the process. I know of two that went through the process because they were in my NA. One was for an apartment complex for 55 and older. They wanted to eliminate the need for balconies on one side of the building. This was because they knew from experience that some older people fear balconies and they are just unused expense. The other was to reduce paring because it was a 'safe house' for women and most do not have cars.

If the process was changed to only allow for comment on those items that the developer wanted to change, the process might be used more frequently.

Your point about open space is also interesting. The personal space is either the patio or balcony. Developers want to build with fewer balconies being required because some people don't like them or use them for storage and they are a problem with rain intrusion and rot.

Our group talked about this issue during the work session. The discussion was around maybe rather than so much "personal open space" there could be more open lawn space that was actually usable for public gatherings. Also, instead of play equipment for children (since only 1 in 4 households have children) that any recreational area could be used. A pool, a covered patio with a BBQ or even a basketball court might be more useful. With open space being combined more you could get more bang for less overall space.

One last thought that I agree with. No matter how many times the staff said that they were not talking about putting multifamily in RS zones, they were setting the stage for that by saying that they were working on smaller multifamily complexes in neighborhoods. I am not sure that these reduced standards are not opening that door.

I encourage people to take a virtual tour via Google Maps of the area north of the OSU campus in Corvallis. They have been allowing smaller multifamily projects in a formerly single family residential area. You can see good examples like are on the posters used by the City and you can also see very bad examples. You can pretty much figure out what is livable and what is ugly and pretty unlivable.

I will be awaiting the next step in the process. It seem like it is going pretty darn fast for me. Just because the consultant has done the codes for other cities, does not mean that they know more than local residents.