Secretaries of State have been in the news sadly this last week, and 100 years ago, another Secretary of State was in the news.

Almost immediately following the end of the 1919 Legislative session, Oregonians were surprised to learn that Governor Withycombe was ill and had died, and Secretary of State Ben Olcott succeeded to the Governor's office.


National news competed for the headline and the front page layout's a little funny. The photos of Withycombe and Olcott are balanced, but the Olcott half of the story is displaced a little by the story and headline about Republican opposition to the League of Nations. 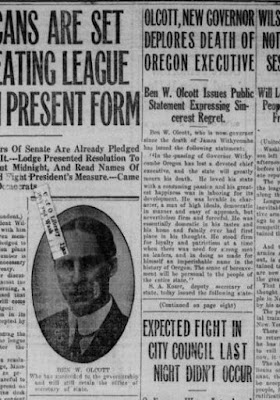 The details of Olcott's succession are a little funny also. "Out of consideration for the memory of Governor Withycombe" Olcott wasn't sworn in until after the funeral, which left Oregon without a Governor during the interim. It seems he didn't sign a number of bills, either, just letting them become law by default. 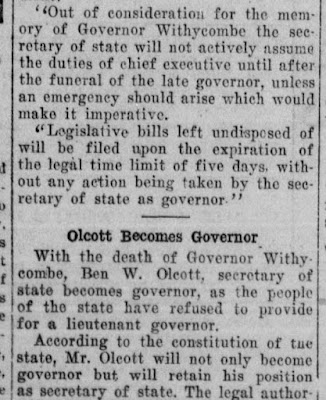 One thing has changed. Olcott served as both Governor and Secretary of State, and we no longer allow this.

Olcott lost his reelection campaign in 1922 to the Klan-backed Walter Pierce.
Posted by Salem Breakfast on Bikes at 10:00 AM

It took until January of 1920 for the courts to resolve the issues in succession, and Sam Kozer unambiguously became full Secretary of State on June 1st of 1920. So the whole thing took a little more than a year to resolve.