America's Greatest Women in 1923 and Women of the Century Project

The Statesman and its greater media empire are running an interesting "Women of the Century" project.


USA Today Network will name 10 American women from each state and the District of Columbia who've made a significant difference in the world as Women of the Century.

The Statesman Journal is coordinating Oregon's part of the project.

You can get started nominating women at usatoday.com/womenofthecentury/.

They're focused on the 19th amendment and women who lived and were active after 1920.

Coincidentally, the National League of Women Voters' selection for "America's Greatest Women" in 1923 turned up recently, and it is interesting to consider in light of the contest.

Most of us probably know only two names, Jane Addams and Edith Wharton. The others have faded and are all in the domain of specialist knowledge at this point. (Maybe you will know more about one or more of them?!)

Right around this time in Salem, State Librarian Cornelia Marvin easily has the most headlines and by this measure would have been considered by her contemporaries the most outstanding local woman circa 1920.

She really deserves a full-length biography and a deeper reckoning with the tensions in her progressivisim:  Her later marriage to the KKK-adjacent Walter Pierce and support for eugenics contrasts with her considerable body of administrative library work and other unambiguous good works. Her work compiling the history of local soldiers in World War I may have been lost or underappreciated. She also vacationed a lot, and I wonder if there is a story there in other interests or other people she visited. There are multiple threads that seem worth chasing down and analyzing in much greater detail. She was a fully complex individual with significant accomplishments.

Here are some headlines from the period. Several of them are from the front-page.

Hopefully the Women of the Century project will give more visibility not just to the usual suspects but to some whose attainments have not got the attention they deserved.

And here's the clip in print. 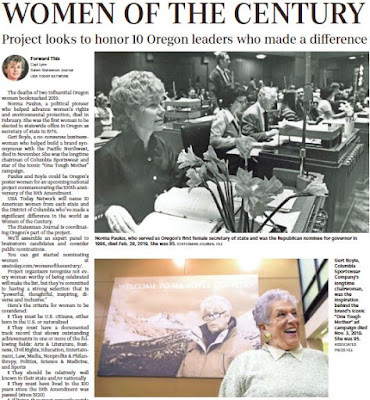