As Salem considers new road projects and the prospect of a third bridge across the Willamette River, we would do well to reflect on the example of the Hawthorne Bridge in Portland.

On Tuesday the Rivercrossing Alternative Modes Study wrapped and issued their final report (91pp pdf). The study contains a number of suggestions for improving walking and bicycling facilities and for making it easier to walk and bike.

All of the suggestions are good ones, and they should be pursued independent of the proposed highway-style bridge. They are basic kinds of things that will help Salem renew its bicycle-friendly status at a higher level. We hope the City will shoot for gold, not merely silver! 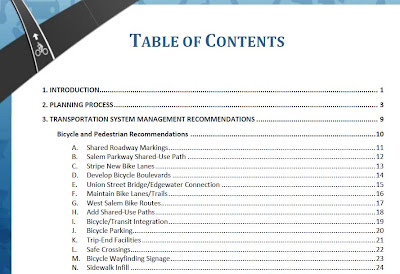 Rather than discuss the suggestions now in a block, we'll probably refer to them as relevant topics and places arise. It is not likely that any of them will surprise you, as none of them are especially novel, but it is good to see them collected as part of a plan.

Still, the plan could be more ambitious. (For previous analysis see here and here.) The goal of the study's recommendations is


to reduce SOV [single-occupant vehicle or "drive alone"] travel over the Willamette River in Salem by 8 percent or more in the future planning horizon year (2031) over currently projected traffic volumes.


For comparison let's look at a different bridge, the Hawthorne Bridge in Portland.


Portland: Bike Rush Hour on the Hawthorne Bridge from Streetfilms on Vimeo.


Over at Bikeportland, a couple of slides from National Bike Summit presentation on Portland's bike strategy show the way that bikes save money. By dramatically growing total traffic volumes without an increase in motor vehicle volumes, the increase in bicycling improves total mobility without requiring costly road widening. 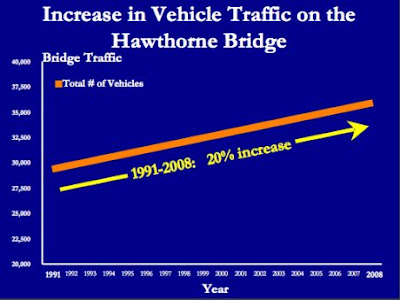 The captions in italics are from Portland's slide commentary.

The next slide breaks out the 20% increase by mode share. 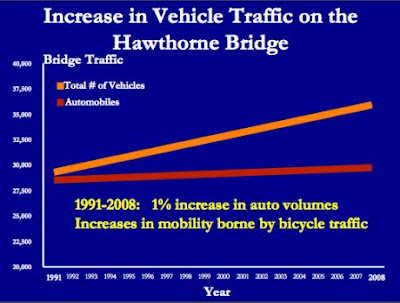 Notice the red line: The trendline for motor vehicles is flat. Bicycling has absorbed the growth!


In the case of the Hawthorne Bridge, the negative effects of congestion have been kept at bay. Because, while the number of vehicles increased 20% between 1991 and 1998, that increase has been almost wholly in bicycle traffic.

The comments go on to contrast this result with the expected results of prevailing traffic analysis and engineering:


Had the increase been—as it might be in most places—automobiles, then the intersections at either ends of the bridge would likely have failed in their ability to effectively and efficiently move traffic.

Since bicycle traffic and not car traffic has absorbed the increase, auto traffic proceeds unhindered.


However, because the increased demand for mobility has been borne almost exclusively by the bicycle, automotive traffic flows in this area the same today as it did in 1991. It is for this reason, in part, that Portland’s award winning traffic engineer, Rob Burchfield, states that: “Bicycling infrastructure is relatively easy to implement and low cost compared to other modes. It is by far the most cost-effective way to provide for personal mobility in an urban transportation system.”


Some people have objected that west Salem is significantly more hilly than inner southeast Portland, and therefore that geography inherently makes bicycling in this area of Portland more likely than in west Salem. They say that it is not realistic to expect similar increases in Salem bicycling. This assumption is ratified in the Rivercrossing Alternate Modes Study, which supposes an 8% shift in all modes, not merely bicycling - nowhere close to Portland's 20%.

When we consider that a new bridge is a $500M proposition, we might ask ourselves, what would 10% of that applied to bicycling accomplish? Could we spend a dime in order to save a dollar? What would a $50M investment in bicycling yield? Would it yield 20%?

Unfortunately we don't know the answer. The transportation planning already postulates, already assumes as a given, that the only worthwhile and effective form of mobility - the only mobility for which we have to plan - is the single-passenger auto.

What truly is the cost-effectiveness in mobility among the different options? This question has not been asked in any serious way. Hopefully ODOT and others will start "least-cost" planning soon.
Posted by Salem Breakfast on Bikes at 9:30 AM

Sooo, what happened to the suggestion to get the State of Oregon to live up to all its lip service about telework and flexible start times? We could eliminate rush minute over the bridges entirely with zero capital cost just by getting Oregon to let employees decide for themselves when to start and stop (outside a core 10-2 p.m. or something)?

(Wonder how many of the ODOT employees who are going to be shipped off from downtown to the Fairview hinterlands will start driving?)

At least one of the Fairview folk has mapped and scouted a route and intends to continue to bike. Happily, the City is aware of some of the difficulties.

A reliable report suggests that DAS is re-xamining lease requirements with a green pair of lenses. Hopefully future arrangements will be made more sensitively.

Finally, via Bridge to Work Day and the Fast Lane program, the State will highlight the telework and flextime opportunities.

You should see some progress over the course of the summer. It's almost never as much as we wish for (or indeed need), but it's something! Keep an open mind and be on the lookout!

There are essentially no telework and flextime opportunities -- the Gov and DAS have left it up to each Department, and the Departments have all figured that there is no upside to them in promoting flextime and telework. Thus, on paper we have a program, but the burden is on the employees to convince their management and their management's management -- which is why there is almost no participation.