As part of its $1.5M allocations, $85,000 was to begin implementing recommendations from Rivercrossing Alternative Modes Study, which was to develop plans to ways to increase bike transportation and to reduce drive-alone car trips across the river and bridges.

The Department of Energy has approved the grant!

At our Vision 2020 meeting last week, Julie Warncke shared an outline of the projects:

Bike Route Destination Signs on the Winter Street route, from Hoyt Street SE to Cherry Avenue NE; on Center Street from 24th to Lancaster; in the West Salem business district (6th, Rosemont, Edgewater); and on the 12th Street Promenade.

Sharrows on Chemeketa Street between 14th and Front; on Rosemont Avenue NW; and on Musgrave Avenue NW. 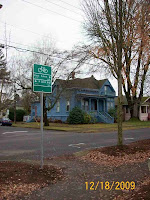 (An example of a bike route destination sign, this one on Chemeketa Street at 14th going east.)

Exact locations of signs and pavement markings, as well other details are still to be determined, and there will be further opportunities for feedback and comments.

All of these will be very nice incremental improvements and will make bicycling in the core downtown and close-in neighborhoods easier!
Posted by Salem Breakfast on Bikes at 8:15 AM