The next step for the former Battlecreek Golf Course is parks planning! This is great news, and for the park to be able to help manage floodwaters as well as to provide recreation and green space is terrific.

On Council agenda tomorrow night are ordinances to amend the Salem Comprehensive Parks System Master Plan and to amend the Transportation System Plan to service the proposed park.

A public hearing is to follow on Monday, April 19th.

The proposed park offers many sticky wickets, alas. It's beyond our scope just now to propose solutions, but we want to point out some of the pre-existing structural conditions that make connections to the park more difficult than they should be.

The current planning process does not appear to envision improving connectivity, and instead accepts the existing conditions and relies on bike lanes on busy streets. As it stands, the envisioned configuration will encourage people to drive autos to the park instead of using active transportation like walking and biking. 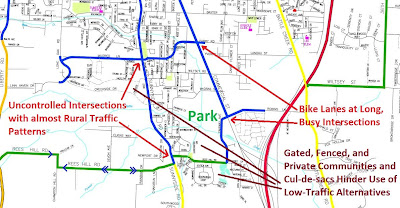 The park site is wedged in between Sunnyside Road, a minor arterial, and Commercial, a major arterial. On the north and south, Madras, 13th, Fairway, and Rees Hill are all rated as collector streets. Access to the park is fundamentally premised on the use of busy roads. (road classification map here)

Consistent with the area's development around golf courses, there are several fenced and private communities neighboring the park site, as well as a number of dead-end cul-de-sacs.

Between the busy roads and the unconnected neighborhoods, access looks to be problematic.

The City's plans call for a new collector street with bike lanes, and recent development has also entailed new bike lanes on other streets. Still, even with bike lanes and traffic lights the intersections with Commercial are long and busy, and don't exactly invite parents to send their children to the park by bike. The intersections on Sunnyside do not have traffic signals, and while traffic clearly pulses with clearings, at the same time speeds are higher and children may not see a car in time.

In the planning process, the City should spend more time thinking about the many residents to the west of Sunnyside and to the east of Commercial, and those north and increasingly south of the park, and the ways to make easy connections to the park in order to encourage walking, biking, skateboarding, and other active forms of transportation.
Posted by Salem Breakfast on Bikes at 1:30 PM