On the Council agenda is nothing specifically about bicycles, but several matters show some of the ways "business as usual" hinders fully integrated transportation planning for the 21st century.

One of the matters may, however, be a small success.

As we have worked on making Winter Street a north-south connection through town, the way to connect it to Cherry Avenue and the prospect of a connection to the Kroc Center has been on our minds. The Highland neighborhood was also working on the possibility of connecting Maple Avenue to Salem Industrial Drive. The first step in making this a street connection is the dedication of right-of-way. This is before the Council tonight.

Update: The City adds that

On council is the dedication of right-of-way that was required as part of the Urban Growth Area (UGA) permit for the Capital Toyota development. The UGA, however, only requires that they develop the street south to their southern driveway. South of that they are only required to provide a bike/ped connection to Maple.

Less exciting are several other topics.

The chief one is the persistent interest in the airport. LoveSalem has a few tart observations. On the docket is a proposal to apply for $50,000 in State funds which will be a 5% match for $1M in Federal funds. The anticipated uses are to:

Air travel is one of the least environmentally friendly forms of travel, and it is far from clear that a minor local airport will be important in the decades to come. As unpopular as the horns are, we would do better to focus on rail and ways to make rail common and acceptable.

Also on the docket are two proposed annexations for significant chunks of development abutting the Keubler-Cordon parkway. One is out south, just off Keubler. The proposal involves about 40 acres and proposes to rezone one block: 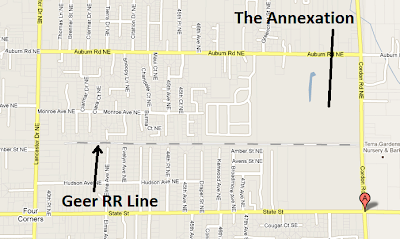 The other annexation involves a 118 acre parcel between State Street and Auburn Road just off Cordon Road. It proposes to:


The parcel is sandwiched between Lancaster and Cordon, an area poorly served by north-south alternatives to these very busy roads. We hope that street planning will encourage low-traffic connections and not always force bicyclists onto bike lanes striped on arterial and collector streets. This is especially critical because the Geer Line railroad right-of-way bisects the parcel, and you can see from the map that there are no paved official north-south connections across the Geer Line. 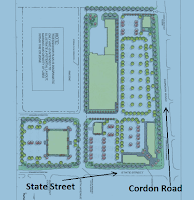 Concept drawings for the Commercial Retail zone at the corner of State and Cordon show large parking lots, strip mall style footprints, and an orientation off State and Cordon. Developers appear to want destination box stores rather than smaller neighborhood businesses. It is not clear these will be pleasant to walk and bike to.

As for Pictsweet - they will be required to provide north/south connectivity. The details of this will be fleshed out through the development process - including a required UGA permit, subdivision, and Site Plan Review (Site Plan Review is just for the commercial and multi-family elements). The old rail line is no longer owned by the railroad. They sold it off - and it is owned by someone different from the owners of the Pictsweet property.

Will Salem be applying for these monies? Which projects?

Yes, Salem will be applying!

But we don't know what the projects will be yet. Though folks have informally discussed that grant as well as the Transportation Enhancements ("TE") grant, details weren't announced until last Thursday. So now we know what the scoring and program priorities will look like.

Candidate projects will be discussed in both Vision 2020 meetings and MWVBTA meetings. There is at present not yet a consensus around a particular project or group of projects.

We'll be posting shortlists and final recommendations after there's more discussion and debate!

There is a route! Monroe Ave runs east-west just north of the old railroad. Dead ends branch off to the south. At the south end of Deana there's a grassy lot, a gap in the fencing and blackberries, a narrow dirt trail across where the railroad tracks used to be, through the ditch and out onto Evelyn Ave. (Wheee! :-)

Thanks for the "off-road" tip. Maybe in the update of the bike chapter of the Transportation System Plan we can formalize some of these and make them safe, attractive, and comfortable!