Bicycling in this week's Salem Weekly 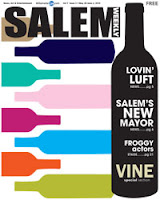 Two great pieces about bicycling in the new Salem Weekly!

In the print version of Desperately Seeking Salem, Emily Grosvenor writes about her husband's bike commute and the barriers both she and her husband still experience bicycling around Salem.

On his way to work, he Froggers his way through throngs of Portland commuters, local delivery trucks, pedestrians with strollers, and gangs of Northeast Salem's strangely territorial teenagers, none of whom are happy to share the roads or the crosswalks with him.

People who see Adam on his biking commute seem startled to even see someone biking. Worst of all, some just refuse to see him. Adam, for his part, has never once had the pleasure of tipping his hat at a single other biker on his commute.

Jay Shenai writes about Kidical Mass and a mini-profile of Kat Frankin. He also notes that the ride will need additional people to step up and help lead it in the fall and thereafter.

[A]s it continues to attract riders, will it last?

Kidical Mass Salem began as an obligation for Franken, 25, an AmeriCorps volunteer who works as a waste reduction educator for Marion County. She was tasked with developing a community action project as part of her year-long term of service, but rather than follow the traditional opportunities to network with major non-profits and prospective future employers, Franken instead chose to connect her project to her passion: bicycling....

As for the ride’s future, Franken’s AmeriCorps service ends in August, as will her project. Her future plans are uncertain. She hopes someone else will take on Kidical Mass Salem, but even if no one does, the important thing for her is that people keep biking.

“If it turns out they don’t need [Kidical Mass], then it doesn’t really need to continue,” she said.

After all, if her experience with Kidical Mass Salem has taught her one thing, it is this: Everyone should be empowered to make a difference.

“Why not me?” she asked. “Changing Salem comes from me.”

“It doesn’t have to be someone else.”

Go pick up a copy and read the pieces!
Posted by Salem Breakfast on Bikes at 7:00 AM