At Council on Monday are a couple of matters of interest to bicyclists. 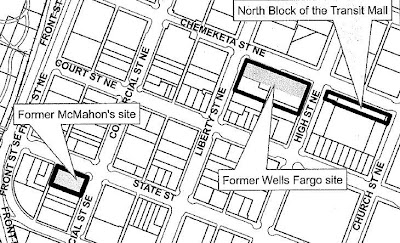 The first is a report by the Vision 2020 Town Square Task Force chaired by Mayoral Candidate and City Councilor Chuck Bennett. The group studied several squares and gave a more detailed look at squares in Boise, Portland, and Vancouver (BC).

From a bike standpoint, the Wells Fargo site is on the Chemeketa bikeway and is probably better. The McMahon's site is more difficult to reach, especially for families and kids who might want a lower-traffic avenue for access, though the site is very near two bike shops. The closure of the railroad crossing at the Carousel will also diminish State Street's walking and bicycling connectivity. Additionally, the corner of High and Chemeketa was the site of old City Hall, so there's a sense that it would occupy a historical center location. This site is also adjacent to the Transit Mall.

Also on the agenda is the "Bond-Funded Railroad Crossing Safety Improvement Projects and Establishment of a Railroad Quiet Zone." It sounds kindof complicated, but it contains some exciting news for bicyclists.

One of the crossings is at 12th & Chemeketa, at the intersection of the 12th street promenade and the Chemeketa bikeway.

In order to create a "quiet zone" each of the rail crossings needed to be treated with improvements from a list of approved treatments. The least intrusive treatment on Chemeketa was also the most expensive. According to the city, a "four-Quadrant gate system that effectively closes the crossing when a train is approaching to prevent vehicles from driving around the gates to get across the tracks [would] cost...$400,000 to $500,000." 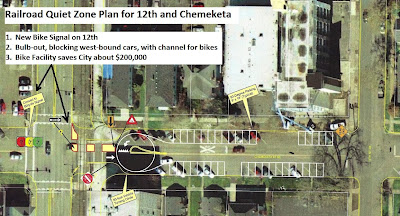 Bicycles to the rescue! Preserving Chemeketa as a bikeway, but closing one direction to auto traffic will save the city $200,000 or more. This preserves mobility and meets requirements for the rail safety. According to the city, "by making the street one-way and installing the medians, the existing crossing arms will effectively close the crossing. The estimated cost for this project is around $200,000."

This would also be the city's first bicycle light installation. This is an exciting development, and we hope Council approves it.

Other crossings for work include: Sunnyview, Madison, Market, D, Marion, Center, Court, State, and Mill streets. Additional crossings north and south may be included as budget permits.
Posted by Salem Breakfast on Bikes at 9:00 AM