Sun and Citybikes at B on B

It was a lovely morning for Breakfast on Bikes today! We even got some sun! One of the highlights was seeing more city bikes and cargo arrangements on the road.

Pat Fisher, who administers the Transportation Enhancement program for the Department of Transportation, which contributed a large chunk of over $1M in funding to the Union St. Railroad Bridge, brought her old-school bike with a flowery basket! 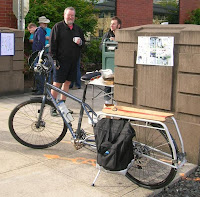 John brought his new xtracycle longtail! It's one of maybe 5 now in the city. Hopefully we'll see more cargo bikes this summer!

On the concrete pillars are diagrams of the "quiet zone" treatment for 12th & Chemeketa as well as quadrant maps for the mapping update with low-traffic routes. It was great to be able to show the quiet zone project right there on site and to invite people to mark up the quadrant maps with their own insider tips and routes! The crowd-sourcing is really bringing in some good routes. 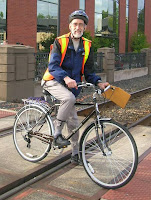 We also saw several more examples of city bikes, including a Breezer with an internal hub and this lovely new Schwinn.

Compared to last summer, there is already a new diversity in looks and styles!

The handy boys from Santiam lubed chains, adjusted shifting, and helped out with quick inspections! For many, departures were noticeably quieter and smoother than arrivals. Thanks Troy & Cory! (Dan, too, but he came later.)

Here's bikeportland's review. They called it an "amazingly well-designed product," and we all agreed. Even the gearheadiest and most jaded were impressed. It looks to be a real advance on cargo capacity and convenience!

The attachment to the bike is simple, and the wheels mean you can roll it in the grocery store, roll it to your bike, and roll out on your bike - no transfer or lifting necessary!

All in all it was a fine morning.
Posted by Salem Breakfast on Bikes at 3:00 PM