Bridge to Work Day - Walk or Bike to Work Tomorrow! 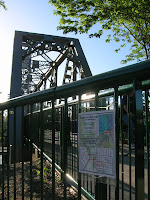 The Union St. Railroad Bridge is open! Don't forget to walk or bike to work tomorrow, especially if you live in West Salem!

Clem...proposed the idea as a way to encourage residents to start using the bridge again to bike and walk to work.

The move could help reduce traffic on both bridges, improve residents' health and decrease Salem's travel carbon footprint. Average weekday traffic on the Marion and Center street bridges is as many as 94,000 vehicles with peak times during the morning and evening commute, according to the city. That figure could be cut by 20 percent if everyone biked or walked to work one day per week.

"It's all about making sure people know they have choices instead of being stuck in a car on a bridge," Clem said.

Tuesday's event will also include information on carpools and transit options as well as guided walks and rides to the Capital and the Salem Civic Center.

"Why not do it every day? And besides the view of the river is just incredible." 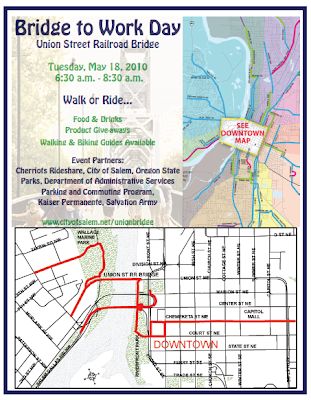