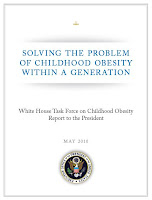 This week the First Lady released her report on childhood obesity. Awkwardly titled the White House Task Force on Childhood Obesity Report to the President, SOLVING THE PROBLEM OF CHILDHOOD OBESITY WITHIN A GENERATION, it nonetheless represents coordinated thinking on the systemic patterns that contribute to obesity - all the ways we make things difficult.

As you would imagine, walking and biking play a significant role. Without drilling into analysis, here are some salient excerpts.

First, the pie chart on how kids get to school. According to an article in the New York Times last fall, "In 1969, 41 percent of children either walked or biked to school; by 2001, only 13 percent still did." In 2009 things are no different. 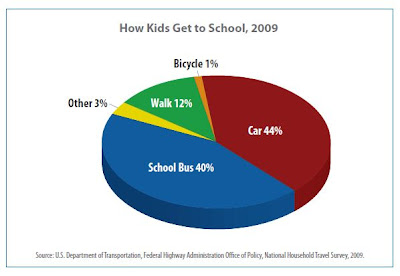 Much of the report is focused on using active transportation for short trips, whether for kids, caretakers, or entire families.

Programs like Safe Routes to Schools (SRTS), funded by the U.S. Department of Transportation (DOT), have proven an effective way to get students safely walking and biking to school. Serving students in grades K-8, the SRTS program supports capital investments, such as building sidewalks, crosswalks, creating better community designs, and providing other supports for active transport. Nearly 6,500 schools are participating in the federal SRTS program, which has provided $612 million for this purpose since 2005. SRTS helped and continues to help increase the number of students walking to school322 and decrease those being driven to school. A study of SRTS sites in California showed a 38% increase in students walking to school. (Page 80) 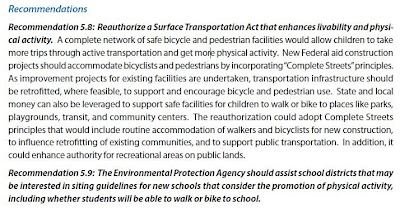 A complete network of safe bicycle and pedestrian facilities would allow children to take more trips through active transportation and get more physical activity. New Federal aid construction projects should accommodate bicyclists and pedestrians by incorporating “Complete Streets” principles. As improvement projects for existing facilities are undertaken, transportation infrastructure should be retrofitted, where feasible, to support and encourage bicycle and pedestrian use. State and local money can also be leveraged to support safe facilities for children to walk or bike to places like parks, playgrounds, transit, and community centers. The reauthorization could adopt Complete Streets principles that would include routine accommodation of walkers and bicyclists for new construction, to influence retrofitting of existing communities, and to support public transportation. In addition, it could enhance authority for recreational areas on public lands. (Page 81)

The report also focuses on land use and development patterns that help or hinder active transportation.

Communities could also develop zoning requirements that create safe, non-motorized routes such as sidewalks, pedestrian malls, and bicycle paths between all neighborhoods and supermarkets, grocery stores, or other retailers who sell healthy food. (Page 54) 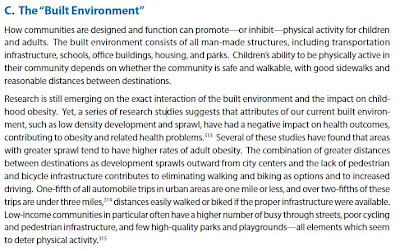 Yet, a series of research studies suggests that attributes of our current built environment, such as low density development and sprawl, have had a negative impact on health outcomes, contributing to obesity and related health problems.313 Several of these studies have found that areas with greater sprawl tend to have higher rates of adult obesity. The combination of greater distances between destinations as development sprawls outward from city centers and the lack of pedestrian and bicycle infrastructure contributes to eliminating walking and biking as options and to increased driving. One-fifth of all automobile trips in urban areas are one mile or less, and over two-fifths of these trips are under three miles,314 distances easily walked or biked if the proper infrastructure were available. Low-income communities in particular often have a higher number of busy through streets, poor cycling and pedestrian infrastructure, and few high-quality parks and playgrounds—all elements which seem to deter physical activity. (Page 78)

Posted by Salem Breakfast on Bikes at 11:00 PM

Ironically, the children from 1969 make up our current overweight and obese adult population. Something like 60% of US adults (those active kids from 1969) do not meet min. physical activity recommendations (60m/day). Walking and biking to school does not protect against overweight or obesity. Active transport to school a start to helping kids gain some of those crucial physical activity min. during the school day.