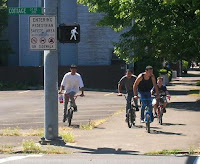 Yesterday while walking around downtown, I saw roughly an equal number of people on bikes in the street and on the sidewalk. And, speaking again in rough generalizations, those on the street had the "gear" and looked like people who biked regularly. Those on the sidewalk looked like they biked infrequently and only in fair-weather. There were lots of kids by themselves, and families with kids biking on the walks.

Biking on the sidewalk downtown is not permitted, of course. And the sidewalks should belong to people on foot.

But the reason people bike on the sidewalk is because the roadways are terrible for biking! For people who bike regularly, it is not pleasant, and feels more dangerous than it should. For newbies, it feels like a deathwish. Downtown roads don't welcome people on bike, so we punish them for the sane choice of biking on the sidewalk.

And kids? Are we gonna make them bike in these roadways?

But maybe things are changing. Could bikes becoming the fashion downtown?

Here's an ad in the Thursday paper for the Arbor gift shop that features a tandem bike! An ad for First Wednesday also featured a bike. Anyone who of a current third example?!

At Council on Monday night, there's also a little bit of bikey goodness.

Very exciting to see is the Draft Council Goals for July 2011-2012. It includes a statement in support of multi-modal transportation choice and bike connectivity!

Example Strategies to Include:


Hopefully the city will fund and construct, not merely pursue. The focus on downtown is great to see.

State and Commercial Drive through

Much less exciting is the bank drive-through question. There may not be a good solution here. There is no question the corner needs to be developed. But it's too bad that development along State street here cannot be mixed-use with affordable housing, contribute to greater density, and be more walkable, with an emphasis on walking connections to the park, riverfront, and downtown.

We need to find ways to get people downtown without also requiring them to drive a car. More auto-centric development doesn't help in this. 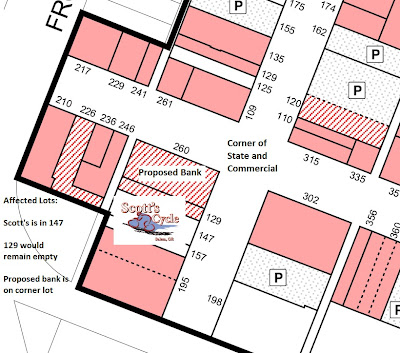 A proposed site plan has been posted in the documents on whether to permit bank drive-throughs in the historic district.

While the specific parcel driving the change is at the corner of State and Commercial, it's important to remember the matter on the table is whether to permit drive-throughs generally. The specific development at this corner would also need to go through a site plan review.

(The drawing here is conceptual, and you will notice the sidewalk configuration doesn't match with the corner bulb-outs and parking.)

Monday night the specific matter is whether to hold a hearing on August 8th.

The City will continue the discussion on a proposal to ban smoking in parks.

A report on the Downtown Economic Improvement District. The first call for proposals was a bust, with difficult requirements and the downtown merchants and property owners quite fragmented. The City proposes to refine the call and to solicit proposals again. The new submission guidelines would go out mid-month.

I don't know truly how interesting this is, but with talk about the 2015 Council Goals, it seemed interesting to check back. Here's a report card:

Doesn't look so good, does it?
Posted by Salem Breakfast on Bikes at 10:00 AM

As a biking newbie, I can say your comments on spot on. I simply don't bike fast enough or with enough grace to ride in downtown. I've gone a few times on Sunday when traffic is very light but don't have enough confidence in myself or drivers to take my kid in the trailer on the street. We end up walking the bike to get through downtown to Riverfront park.

Do you know about the free Smart Cycling Clinics? They're two-hour clinics on city biking, and the next one will be Saturday, August 6th. They offer skills and tips and confidence for navigating just these kinds of situations. It won't fix the streets, but it might give you additional helpful tools for coping with them!

Excellent post. Biking through downtown (especially north-south) is simply too difficult for most people to contemplate. Chemeketa is the biggest plus, but walking my bike is about the only way I will essay Commercial or Liberty much of the day. Too many close calls with distracted drivers or pedestrians (in the crosswalks).

Updated with a report card!