Previously, they'd been tested in Portland only.

A colored bike lane is a tool that has several potential uses. Some of the draft recommendations for the Salem bike plan update may employ long lengths of colored bike lane to give better definition to the space and separation from cars. 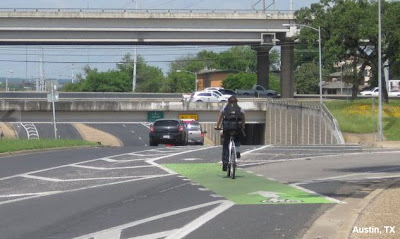 But this is not the only use. Here's an image from another state capital, Austin, Texas. It is a short length of colored bike lane to assist with a tricky crossing where the travel lane veers right and a person on bike might wish to continue straight, across the veering travel lane. Salem has some of these at the Y-intersections with Liberty and Sunnyside on South Commercial.

With Federal approval it should be easier for Salem to consider using colored bike lanes at appropriate locations.

For a sense for the sludge through which these things have to pass, here's the approval letter and the larger discussion at ODOT's page on the Manual on Uniform Traffic Control Devices.

You'd think something like this would be fairly simple to adopt...but it's not.

Fortunately, a group of cities has banded together in the National Association of City Transportation Officials to create the Urban Bikeway Design Guide. Here are its recommendations for the colored bike lane.

Now that Salem has some sharrows, maybe we will see some colored bike lanes soon!
Posted by Salem Breakfast on Bikes at 7:00 AM

I love these colored lanes. They would be particularly helpful on those tricky crossings, like Edgewater, where routinely motorists drive into the bike lane while waiting for the light to turn green on the bridge to downtown.

That's a great candidate! Of the existing dashed bike lane continuations (neither case on Liberty I cited has existing dashed lanes, and the lanes on both continue to the right), that's the one that on which I hear of encroachment most often. That would be a terrific place for the City to pilot one - and much less complicated than a solution the Liberty crossings.