Back in April it seemed reasonable to ask whether a sustainable city should subsidize air travel?

According to the Statesman, Seaport will stop service on July 18th.

The Oregonian adds that the end of Federal subsidies appeared to drive the decision:

[Newport] city officials offered free housing and fuel discounts, they waived tie-down and landing fees -- but in the end, it just wasn't enough. Four months after state and federal subsidies stopped, SeaPort Airlines announced it will stop flying out of Newport effective next Monday. 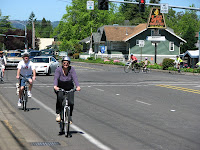 So what do you say we forget chasing after air travel! Let's make Salem a world-class bicycling city!

I wonder how much longer the city will throw good money after bad expanding the airport. Unless somebody invents an electric airplane, air travel is destined to go the way of fuel source on which it depends.

Trying to keep commercial air service in Salem appears to be a losing proposition. Continuing to do so flies (no pun intended) in the face of the "Age of Austerity" likely to be with us for many years to come. I suggest focusing on a more livable, creative, rail-connected, and people-centric (not auto-centric) city. That's the direction things are heading. Air travel is not required for this.