Citizen advocate David Cary bikes along Kuebler regularly, and he noticed that the cut-throughs being constructed to connect neighborhood dead-end streets to Kuebler were now impassable to persons riding bikes.

In the cut-throughs former condition (located at Khyber Ave, Tariff Ct., Sycan Ct., Summerfield Dr., and Coloma Ct., all southeast), they were all useful, though they did not conform to the requirements of the Disabilities Act. 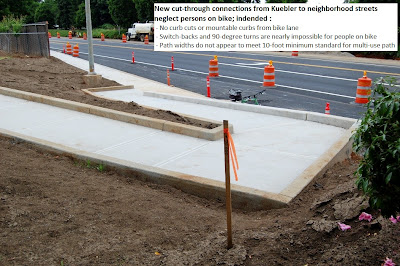 While the new cut-throughs appear to comply with the Act, for people on bike they are much less useful, and are clearly optimized for wheelchair traffic rather than for multiple uses.An expert on bicycle and pedestrian design confirms that these are essentially not constructed for people on bike:

Wheelchair users are expected to remain on the sidewalk level and not enter the street level....the connection between the path and sidewalk looks like a level landing, which is required by ADA for wheelchair users to be able to turn 90 degrees to access the sidewalk that is perpendicular to the path.

Back in February the City held an open house on part of the Kuebler widening project.

At that time it seemed like there were opportunities to enhance the crossing at Lone Oak for people on foot or on bike, but on March 1 city staff indicated that "the Kuebler project is already bid and construction has started."

But because of the economy, most projects are coming in under bid, so it's not like value-engineering is top-of-mind. If anything, stingy plans could be beefed up and a change order issued to benefit more users of the roadways.

In any event, more public outreach during the design phase could help catch things like this.

Unfortunately, the City may not be interested in soliciting a greater range of feedback. Also in the spring staff indicated that they didn't

want to post plans for public review while they are still in draft format.

But here's what happens when there's not enough public comment on draft plans.

It is disheartening that while Bike and Walk Salem trumpets improved facilities for people on bike in Salem, design and engineering staff do not seem to anticipate improved bicycle connectivity on current projects and instead will create future costs with the need for retrofits.

(Image provided by David Cary)
Posted by Salem Breakfast on Bikes at 6:30 PM