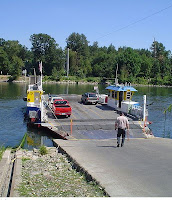 The Buena Vista Ferry grand opening and ribbon cutting is today - though it had a soft open last month - but news that on August 5th people on bike will start paying a $1.00 toll was a downer.

Changes at the ferry landings in Marion County

Some of you may know this but we need to continue to get the information out to our members and all cyclists. The big news is the completion of the Buena Vista Ferry. It became operational again on or around June 24. The official ribbon cutting will be on July 6th at 3 pm. at the launch site near the intersection of Buena Vista and Talbot Roads. The public is invited.

In addition to the new ferry, rates for using both ferries in Marion County will increase. The vote was taken on Wednesday, June 22nd. The impact to cyclists is obvious. Where we used to cross for no fee we will now pay $1 per crossing. Clearly there was some communication problems getting that information out to the club and to cyclists in general in advance of the vote. As a result the county was willing to extend by 30 days when cyclists will begin to pay. Basically that means that beginning on August 6th (not July 6th) cyclists will be charged $1 per crossing. Motorcycles, cars, and trucks will also have an increase. And no, pedestrians still will not pay. (And yes, the question has been raised if you carry your bike on board are you a pedestrian or cyclist?) For now our goal is to get the information out to cyclists (members and non members) that the fees have increased.

Forecasted numbers and/or possible revenue from the cyclist fee increase: According to Marion County “Recent usage shows 4,000 riders per year at the Wheatland Ferry and 376 per month (or 4,515 per year) at Buena Vista. The new Buena Vista ferry will have extended hours - with service 7 days a week, 7 am to 7 pm. This is expected to increase usage overall by as much as 480%.”