Orchard Heights and Doaks Ferry: Missing the Kids for the Cars?

In the Statesman Journal today, Timm Collins asks about the safety of the intersection of Doaks Ferry and Orchard Heights in West Salem. 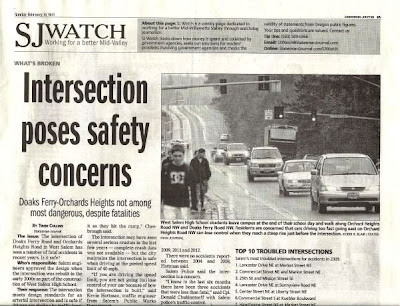 The general conclusion seemed to be that while motorist behavior in the intersection and along Orchard Heights was concerning, by absolute count of crashes and fatalities, the intersection was nowhere near the worst in Salem.

The intersection may have seen several serious crashes in the last few years — complete crash data was not available — but the city maintains the intersection is safe when driving at the posted speed limit of 40 mph.

"If you are driving the speed limit, you are not going (to) lose control of your car because of how the intersection is built," said Kevin Hottman, traffic engineer from Salem's Public Works Department.

Hottman said other intersections in Salem see far more crashes, and Doaks Ferry and Orchard Heights wouldn't even be in the top 50.

The sidebar listing the City's top 10 intersections by crash numbers indeed pointed to difficult and dangerous places - with Lancaster leading the way. 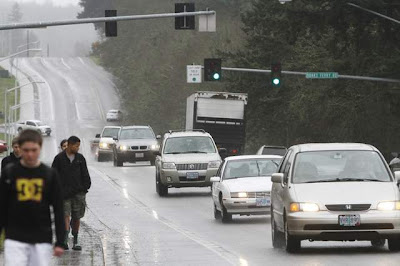 But the safety of road users other than the drivers of cars at this intersection is not perhaps highlighted as much as it should be.

There are four schools - Kalapuya and Chapman Hill Elementary, Straub Middle, and West Salem High - in close proximity to the intersection! (The City's zoning map hasn't even caught up to the changes! and I had to add the blue for Kalapuya and Straub.) Lots of schoolkids should be walking and biking to school. There will also be young drivers at the high school.

To say "the intersection is safe when driving at the posted speed limit of 40 mph" is to maintain a narrow vision of safety and potentially to neglect broad classes of other road users, especially children.

In addition to the four schools, there is a proposed mixed use center at this intersection. It is supposed to be especially walkable.

To say the intersection is safe may also minimize the ways that roads are designed for speeds in excess of the posted limit, often designed for 85% of motorists to follow the limit. So here the road is likely designed for 15% of people to exceed the speed limit. Straight segments and broad avenues often implicitly encourage motorists to flout posted limits. We say and post signs with one thing, but design for another.

Richard Chesbrough who lives near the intersection thinks some drivers are tempted to push that limit when cars speeding east on Orchard Heights Road.

That design is all about car through-put at 40mph, not about the safety of the walking and biking public or about the independent mobility of school children or others who might not wish to drive everywhere. It's about our roads as a fire hoses, pumping out cars.

We even see in the traffic analysis that the movements of autos take precedence. The mobility standard is not about people; it's about cars.

The intersection of Doaks Ferry and Orchard Heights is not one of the city's worst intersections, but the way we talk about it shows the ways as a community we systematically degrade and devalue conditions for people who aren't using cars, those who walk and bike, and especially our most vulnerable, the very young and the very old.

If we want to encourage people to walk and bike, insisting on the safety of busy streets with a 40mph speed limit at or near schools and mixed use centers, is not the way. But sadly it's an instance again where we say one thing, but do another.
Posted by Salem Breakfast on Bikes at 12:30 PM

Traffic engineers have long known that road speed averages are 95% controlled by three things: the surface quality and the sight line distance that a driver enjoys and the width of the lanes. The little signs with numbers on the scattered randomly along the roads are only there to give cops a pretext for stopping targeted subgroups (minorities, etc.). They have almost no affect on the median speeds.

What you are pointing out is simply a truism .... Only auto-mobile persons matter to ODOT. Everyone else is a problem, an undesired user to be ignored or ruled away by regulation or design. Safety means safety only for those encased in steel carapaces.