Serendipity as Innovation Engine: Mike Nord and Encounters with Strangers 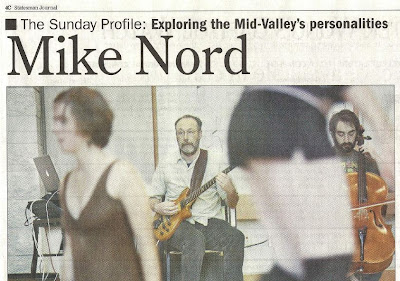 In addition to being a musician and professor Mike Nord is also a regular bike commuter! He is the captain of the Bike Commute Challenge team for Willamette University.

One of the subtexts in Barbara Curtin's profile of him in today's paper is the role of a city in fostering random encounters between strangers that generate culturally and economically useful ideas:

In the mid-1980s, two chance encounters on public transit would change the course of his life.

The first involved the "F" subway train from Brooklyn to Manhattan. We'll let Nord's wife, Ann Kresge, tell this part of the tale:

"I was in grad school, going to the east side of New York City for a graphic design meeting," she said. "He was going to the west side to play in a big band."

Waiting at their Brooklyn subway stop, Nord noticed Kresge's artist's portfolio and started a conversation. They boarded the train together and talked until he got off to change trains in Manhattan.

"I decided to take a risk. I got off, and we started chatting again," said Kresge. "We exchanged phone numbers and got together the next day. We've been together 30 years."

The second encounter happened on on a Manhattan-bound bus where Nord struck up a conversation with fellow musician. The man invited Nord to his home studio, where he was manipulating jazz guitar with electronics.

In a long reflection on the relationship between cities and the social/economic engine of serendipity, Ethan Zuckerman writes

We hope that cities are serendipity engines. By putting a diverse set of people and things together in a confined place, we increase the chances that we’re going to stumble onto the unexpected....

If you wanted to encounter a set of ideas that were radically different than your own – say those of a confrontational homeless guy who sleeps in a tub [Diogenes here, but by extension any sort of innovator or gadfly] – your best bet in an era before telecommunications was to move to a city. Cities are technologies for trade, for learning, for worship, but they’re also a powerful communication technologies. Cities enables realtime communication between different individuals and groups and the rapid diffusion of new ideas and practices to multiple communities. Even in an age of instantaneous digital communications, cities retain their function as a communications technology that enables constant contact with the unfamiliar, strange and different....

There were more economic opportunities in cities, especially for the landless poor, and an array of jobs made possible from the international trade that flowed through the ports. For some, the increased intellectual opportunities provided by universities and coffee houses was an attraction, while for others, the opportunity to court and marry outside of closed rural communities was the reason to relocate. Amsterdam built itself to prominence in the 1600s in part by allowing French Huguenots, Spanish and Portuguese Jews and Dutch Catholics to worship relatively freely – such religious tolerance would have been much harder to find in rural areas....

One of the real costs to a transportation system focused on the drive-alone trip is the loss of a large class of random encounters.

Even in an age of twitter and facebook and foursquare, the face-to-face encounter remains important, and as cities strive for economic innovation - as Salem strives for a stronger and more fruitful economy - the "invisible hand" of the marketplace of ideas works best when the same people aren't having the same conversations, over and over. Novelty and the unexpected are critical for innovation, and a robust transportation system that offers mobility choice, and fosters novelty and the unexpected encounter, should be an important ingredient in economic development. Call it "the big sort," a cocoon, or echo chamber - however you say it, the expanse of the same provides comfort and the familiar, but innovation for the future arises most often from the unfamiliar and even the uncomfortable.
Posted by Salem Breakfast on Bikes at 12:01 PM

Word, here here, and huzzah! Sounds like Richard Florida's "Creative Class". No doubt you are aware of his argument that in a technological era where young talent has more power over where they live and work than ever before, nuturing the creative class help cities attract the best talent to grow their economies. In his focus groups, he found that the ability to walk and bike to work is one of the most important things a city can provide for the creative class. I have also heard him talk about our country's "generica" problem, which seems to have infected Salem.

I have some misgivings about Florida's analysis. The "creative class" strikes me as too homogeneous, and I think Jane Jacobs would stress a greater jumble and variety than Florida. Out-group encounters may be more important than in-group ones, as least as far as innovation goes. (By this measure Lancaster deserves much more attention than it usually gets.)

But certainly the ability to walk and bike to work is an index for a host of good things!

I'm sure Florida and Jane Jacobs had many lively discussions about that over the years. Oh to be in that room. I think they would both agree that everyone deserves to live in a great neighborhood that nourishes the soul. Lancaster sure deserves much better than a new $5mil. intersection.