For Whom the Toll Bells: Funding the River Crossing 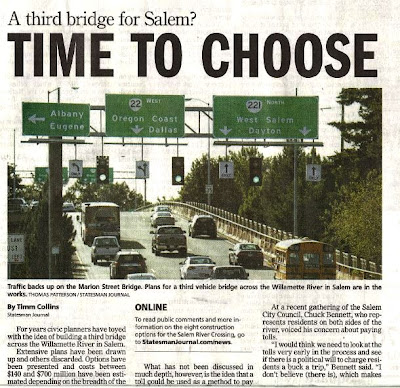 Yesterday's paper had a welcome front page piece on the Salem River Crossing. Though the headline talks about choosing an alternative, the body of the piece is more on the funding plan.


What has not been discussed in much depth, however, is the idea that a toll could be used as a method to pay for the bridge.

At a recent gathering of the Salem City Council, Chuck Bennett, who represents residents on both sides of the river, voiced his concern about paying tolls.

“I would think we need to look at the tolls very early in the process and see if there is a political will to charge residents a buck a trip,” Bennett said. “I don’t believe (there is), which makes me wonder about the financing.”
...
Salem City Councilor Dan Clem, who represents the city’s interests on the oversight team, said he has not made up his mind on the prospect of using tolls as a funding source and didn’t want to guess what his constituents might think at this time.

But what has been established in a 2008 overview of potential funding is that tolling is the quickest way to raise the money needed to pay the estimated $30 million annual payment the city would have to make on a $500 million municipal bond.

Clem said he agreed there needs to be more public discussion about financing, but said it was premature at this time simply because an alternative has not been selected.

Not in the article, but in his public comments on the draft Environmental Impact Statement, State Senator Peter Courtney offered perspective on the finances, and this project's relation to the bigger one up north:


The Draft and Environmental Impact Statement has estimated that Alternative 3 will cost $501 million dollars which is one of the more expensive alternatives. That is more than Oregon 's share of the Columbia River Crossing Bridge estimated to be $450 million! This is a costly package for any city and prohibitive at a time when so many cuts are being made to critical services such as our fire department.
...
Now, I'm not into necessarily a no-build situation, and I know it's very difficult to be in your position, because it's sort of like we try to build prisons or garbage facilities. Everyone wants one, they think we should have them, but they don't want them near them. So I am not going to redesign your designs, but this thing also -- and this is the other hat I'm going to wear -- costs $400 to $500 million by the estimates. Now, that is $50 million more than the State of Oregon's total share in the CRC, the Columbia River Crossing. Now, I can tell you the nightmare that I'm having with a certain other role in my life dealing with the Columbia River Crossing, and cost is one of them. 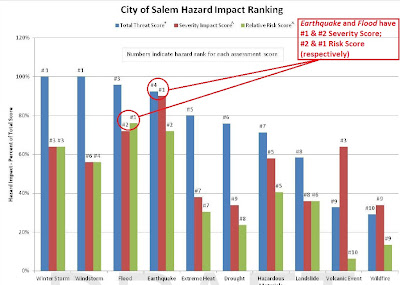 Lots of masonry buildings and critical infrastructure will likely collapse in a big earthquake.

We need to think hard about what is important and what we can afford.

As the Grant Neighborhood Association wrote in their public comment,


If Salem cannot afford to run buses on weekends, how can we support another river crossing? And if we are financially capable to support another crossing, why not use those funds to support and improve our current infrastructure, invest in alternative transportation and raise the quality of life for our residents?

For more on the River Crossing see a summary critique and all breakfast blog notes tagged River Crossing.
Posted by Salem Breakfast on Bikes at 8:30 AM

You are covering this story better than the S-J. Keep it up. When is the next meeting? I assume they are open to the public.

Details will be officially posted here, and I'll blog about it too.

Did you see the S-J editorial that ran on Sun?