One of the things about the Salem River Crossing process that is troublesome is its opacity cloaked in public process. Time and time again people who should know have said off the record that very few really want this thing, that outside of a few individuals they don't know where the real drive for it is coming from. And yet the process has sufficient inertia that folks don't seem to be able to stop it.

A small example of this is an informal memo that as it gets cited and its citations in turn cited, seems to be wrapped up increasingly in official status. 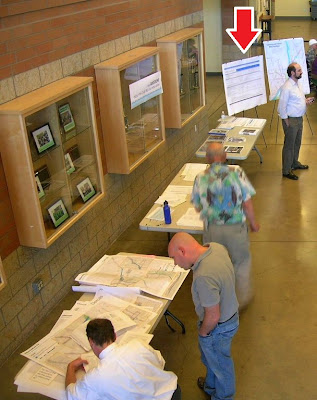 At the Open Houses in May, there was a poster for illustration purposes that wasn't formally part of the draft Environmental Impact Statement. It was labeled at the bottom "The above evaluation is not part of the DEIS for the Salem River Crossing Project, but is provided for informational purposes and is subject to future modification."

Titled "Bridge Alternatives and Assessment of Connectivity to Existing and Proposed Bicycle Facilities within the Study Area," it proposed to identify increases to "bicycle connections across the river to the existing/planned bike facility." (emphasis in original). Even though many have argued that people who bike in Salem do not need another way to cross the river, and instead badly need other forms of connectivity, the addition of a bridge would be (as it was with the Union St. RR Bridge) strictly speaking an increase in connections across the river.

Though we debate about the cost/benefit ratio here, the narrow claim about an increase in the count of connections across the river is true: Add a bridge, the connections increment +1.

Bridge Alternatives and Assessment of Connectivity to Existing and Proposed Bicycle Facilities within the S...

But since the document was not "official," it didn't seem like it merited a rebuttal.

However! It has reappeared, and seems now to require a response.

In the Evaluation Criteria Table, a decision matrix handed out to the Task Force charged with selecting the locally preferred alternative, the connectivity chart is cited and used to develop the assessments of "system connectivity" for bicycling in Salem: 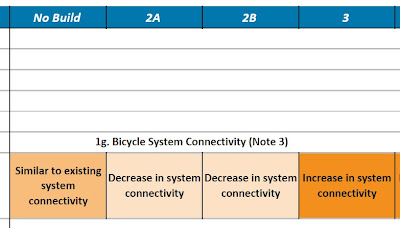 I want to suggest that the shift from "connections across the river" to "system connectivity" is an unwarranted escalation in claims about connectivity, and is potentially misleading for task force members who do not themselves bicycle. 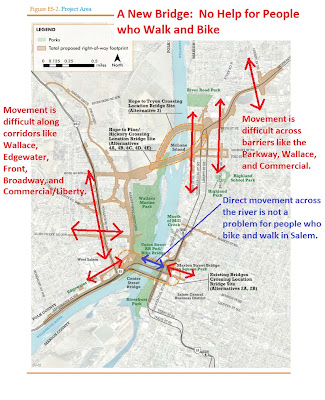 As we have seen (and here and here), the problems with system connectivity for people who bike and walk would be made considerably worse by an enormous highway bridge, its associated on- and off-ramps, and ancillary road- and intersection-widening. The proposed bridges would decrease system connectivity. 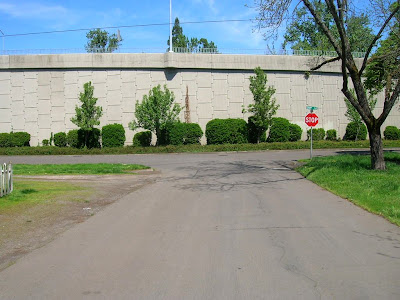 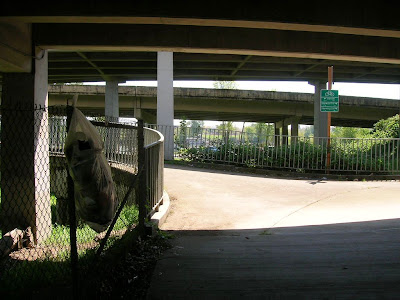 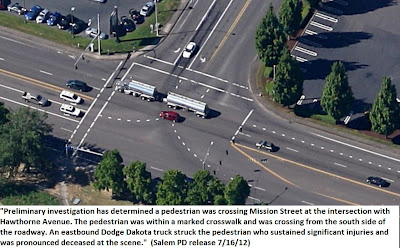 The River Crossing process as a whole seems, like many public processes, to suffer from mission creep. It is reasonable to ask about connections across the Willamette River - but the process developed as a way to back into and then justify a large highway and bridge, and not as an intellectually honest inquiry. The problems and range of solutions have been defined so they have to involve highway-building. That's silly.

And the accretion of ever-larger conclusions from rather slender analyses and technical memos, and from increasingly long and nested chains of citation, is an important ingredient in the mission creep that enables this.

For more on the River Crossing see a summary critique and all breakfast blog notes tagged River Crossing. The Task Force next meets July 24 from 5:30 to 8:30 pm at Pringle Community Hall (606 Church Street SE).
Posted by Salem Breakfast on Bikes at 12:01 PM