The State Hospital and its relationship to the neighborhood is in the news just now. Of course we think about the ways it succeeds or fails for its patients, that's primary. But it is also a large parcel of property in Salem and, like all the State institutions, has a place in the civic and cultural life of Salem. 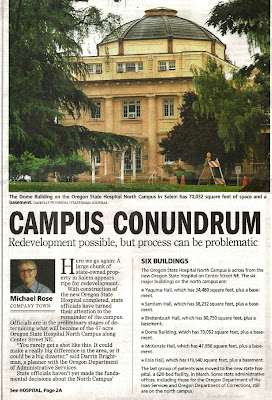 Earlier this week, Michael Rose wrote about redeveloping the parcel north of Center Street, which the State appears poised to sell off as surplus.


With construction of the new Oregon State Hospital completed, state officials have turned their attention to the remainder of the campus. Officials are in the preliminary stages of determining what will become of the 47-acre Oregon State Hospital North Campus along Center Street NE.
...
“You rarely get a shot like this. It could make a really big difference in the area, or it could be a big disaster,” said Darrin Brightman, a planner with the Oregon Department of Administrative Services.
...
Several times, Salem has been down a similar path. The Oregon School for the Blind, the former Fairview Training Center site and the Mill Creek property once were entirely state-owned real estate.

All of the properties offered great potential for Salem. City officials were eager to see tax-exempt state property converted to other uses, which would generate tax revenue. Real estate developers and neighbors weighed in with their suggestions.

And the results? A parking lot for the Blind School, stalled development at Fairview, and a "glacial" pace for new businesses at Mill Creek. No home runs, and altogether not very promising.

Apparently, even McMenamins have turned down a project - their own institutional rehabs like Edgefield and the Grand Lodge have apparently seemed simpler and more profitable than one here.
Not surprisingly transportation figures in:

Why would we want a "large scale retail center" here?! We don't need Lancaster Mall 2 or Keizer Station 2! What about neighborhood center mixed use?!

Interestingly, even former Mayor Janet Taylor seemed to be thinking along the lines of residential mixed use and smaller scale commercial development. It seems like an early 20th century streetcar commercial district to support a walkable neighborhood would be perfect here! That could also include greenspace and park and open areas.

But how to configure greenspace at an institution? What is the proper role of it, especially in the balance between private and public? Discomfort with the nature of a public space is at the center of an appeal recently filed on the cremains memorial (past notes here).

Next week on the 11th the Hearing Officer will deliberate on the memorial's design.

The staff report isn't out yet, but there seem to be two objections, only one of which, however, is providing grounds for the appeal.

In the appeal, Virginia Green and David Skilton claim that the design fails to meet national "standards for rehabilitation."

Interpretation has been in the news. You can't have missed the Supreme Court's interpretation of the Constitution and parts of the Affordable Care Act. Nearer to home, Salemites have recently struggled with interpretations of vacation criteria, of innovative master plans, and broad goals in transportation system plans. The interpretive act and ground-level policy are deeply entwined with each other.

I have a hunch that Green and Skilton will prevail on the merits. The criteria for historic buildings seem to be written narrowly and require that the building be retained and/or restored to something close to its original condition. The plan for the memorial substantially alters one of the walls, and the extent of this alteration and interpretation of "substantially" will be at issue.

The other objection, but not apparently part of the appeal, is the treatment of the dead. Some have claimed that the memorial will require disinterring cremains from the canisters and removing them to other containers. I have not been able to confirm this, but the prospect surely deserves scrutiny.

In addition to this, Green has objected to the "touristic display" of cremains in the proposed memorial. Have the remains of those who have suffered and died - to put it baldly, have and will these remains in the proposed design become fodder for aesthetic delight? So here's where the public nature of the grounds and memorial is at issue. The photos of David Maisel are beautiful. Is putting the canisters on display a violation of the dead? Is there too much art and design, even recreation, and not enough memory and mourning?

Once the staff report is out, there may be more to say. I think of the Western Metal Supply building at Petco Park in San Diego as an example of preservation that alters a building and takes it to a very different use - but retains enough of the building to count as effective preservation.

To be useful, buildings must live in the present and into the future, and sometimes preservation codes seem to want to retain a static, unchanging past. It seems possible that a good design would not meet the strict preservation criteria.

I also think of traditions of religious art, the uneasy but enduring relation of suffering and beauty, and the role of pilgrimage. I have wondered if an objection to "touristic display" is premised on very recent ideas of propriety, suffering, and a division between the sacred and profane - cultural norms rooted in the late 20th century, our age of antibiotics and surgery. I'm not at all sure someone from even the 19th century would find the proposed memorial at all inappropriate.

Still, these are not obvious matters and one cannot be certain. They are interesting and important questions because they get at core and final notions about life and death and meaning and value.
Posted by Salem Breakfast on Bikes at 12:01 PM

The appeal says "...the findings misrepresent the plain meaning of the approval criteria, ignore the building's historic as opposed to architectural values, and overreach the authority of the Commission. The findings are... convoluted and unresponsive to the standards..."

I wish this would generate more conversation! It is really interesting.

Anyway, reading the appeal, I am surprised to find I'm much less persuaded than I thought I would be. The case to my eye hinges on the argument that Building 60, the former morgue, is equal in importance to the Kirkbride J-Building, and I don't find that claim at all persuasive. I think the morgue is clearly a secondary work- and out-building, and therefore does not merit the same level of protection and restoration given to the main building - which has been spectacularly and deservedly restored. Moreover, the extent of the alterations aren't to my eye nearly so severe - "utterly destroy"? - as the appellants make them out to be.

From the appeal: "...the assertion that Building 60 is less significant than other resources...is not supported. All the built elements in the historic district...have been classified as either supporting historic character or not, and, in the language of the National Register, Building 60 has been evaluated as a 'contributing resource'.

...The closed character of such a building [the morgue] is integral to an understanding of that historic use. Cutting a large viewing window into one side of the structure cannot properly be characterized as minimal intervention because it would utterly destroy the enclosed quality that defines a morgue....

Building 60 is no more or less a part of the story of the Oregon State Hosptial than any other contributing resource and the applicants make no compelling case why the historic character of this particular resource cannot be retained.

...there is no obvious option of locating a memorial elsewhere on the campus, and given the infinite number of forms the design of a memorial might take, it is also entirely possible to use Building 60 and still avoid the significant alteration of its historic fabric and spatial characteristics."

The appellants do seem to want to retain the exact original form of the building, and I don't see that the Landmarks Commission erred in failing to insist on this. I think preservation requires more flexibility, and the criteria afford the Commission sufficient latitude to find that flexibility here.

When Howard Hall at the Blind School gets some new use, I hope the Hospital and Landmarks Commission have more latitude than the strict "integrity" implied and desired by the appeal here. That would be too static. Buildings must live, and surely there are ways to bridge both past and future that don't necessarily require strict retention of only the past.

Here's a discussion of the ruling on the appeal.