A New Crosswalk at Mill and 12th Part of RR Work 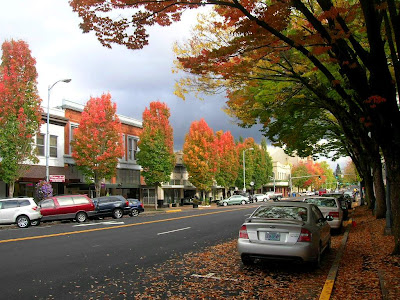 Is is possible to get tired of the pretty fall colors? The broody break in the rains yesterday made going out a pleasure and highlighted the contrast of grey and flame.

Because of the traffic changes here, this stretch of State Street is of particular interest!

And as it happens the trees on the right of the picture (in shadow) will be a topic of discussion at the next CAN-DO meeting on Tuesday: October 16, 2012, 6:00 p.m., First Christian Church, 685 Marion St NE.

US Bank wants to take them out, perhaps as they were taken out on the Commercial Street side of the building, and the City forester will be at the meeting to talk about this. The Salem Downtown Partnership is apparently opposed and would like them to remain.

(Parenthetically, because the cast iron facade of Ladd & Bush is so very special and interesting, this would be one of very few buildings that deserves special visibility from the street - so hopefully a compromise can be reached that keeps both lovely trees and attains a somewhat smaller canopy on the street.)

So if downtown street trees are a particular interest, you might consider attending the meeting.

You might remember the City's plan for the crossing at 12th and Mill.

The project has been on-and-off for a few years, and suddenly it looks like it's on!

It is likely that savings on the road bond have furnished the funds to complete the project.

(On Monday perhaps the City will be able to give more details.)

At any rate, if you haven't been through the intersection lately, the construction is clear! 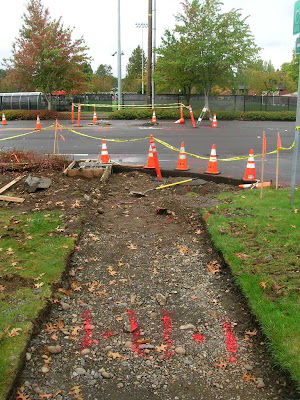 Here's the new sidewalk excavation, crosswalk, and median on the south side of the intersection (in purple on the plans).

The improvements will be helpful, but I still think that this is a sub-optimal design in important ways. 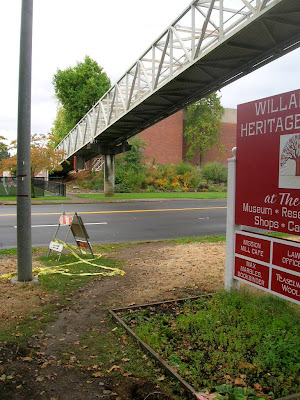 All the crossing on 12th occurs on the north side of the intersection. Even with the construction mud, under the overpass and aligned with the sidewalk along the field and Sparks Center at Willamette, the path worn by many feet is clear. Users have a clear preference.  The new median runs counter to that preference, and I expect some number of users won't avail themselves of it. Additionally, the median doesn't really help people on bike navigating through the intersection.

(Components of work by the tracks would be completed by the RR and not by the City, so these will be staged separately)

In important ways the design solution is half-baked, and may be more theoretical than practical. 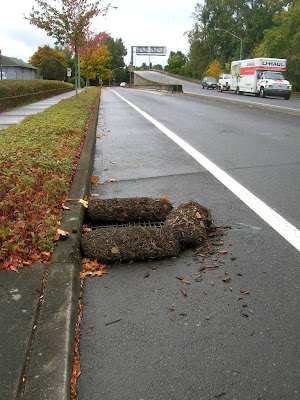 As part of the construction clean-up, these mud barriers for the storm drains constitute a real hazard! In the dark a person might not see them, and an involuntary dismount here with the wacky traffic plan and higher speeds, could be especially dangerous.

Very interesting is the Statesman's story today about the prospects of foreclosure at Keizer Station.

The story about the owner may be less interesting than the larger picture: Development on the edges of cities is increasingly problematic and may be doomed. Also in the paper is a AP story about municipal bankruptcies and other forms of civic dissolution.  The lead example of an expense a town couldn't afford was road repair.  Over on facebook is a similar story about LA. 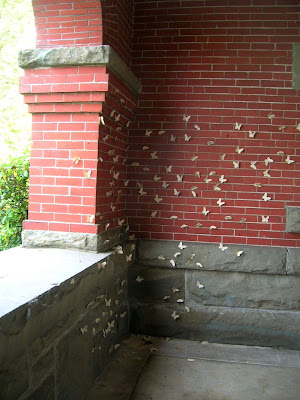 On a somewhat lighter note - but not entirely - in the broody weather, this installation at Eaton Hall was quietly moving. The paper butterflies of Faulkner's writing were escaping from the book, flying out into the world as if to generate new instances of beauty and meaning - and also to die, dissolving into pulp like the leaves in the streets. It was very autumnal.
Posted by Salem Breakfast on Bikes at 11:00 AM

1. Tree canopies slow down traffic, making the world safer for people using all modes of transportation. Think hard before cutting down street trees.

2. That silt barrier could and should be easily mitigated with one of those folding easel-type traffic warning barricades, with an orange flashing light on the top. And maybe a few cones for good measure.

I've had problems with lack of notice of obstruction to the bike lane before! Argh. Thanks for letting me know...I'll avoid this route for the nonce.

It is great to see something being done about this crossing...even if in some ways it isn't a perfect solution . I will be glad to get rid of the bizarre ballast rock ballet when it is done.