Bumps and Gables in NE Salem 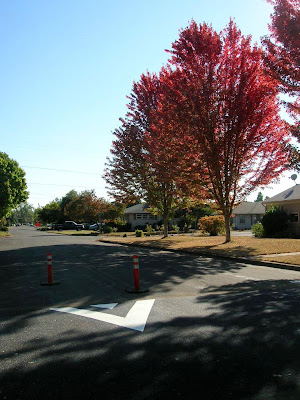 You may recall a very brief note about speed bumps going in on NE 21st in the Englewood neighborhood. The project grew slightly to embrace bumps on Evergreen at the same time.

The bumps are going in this week, it turns out. 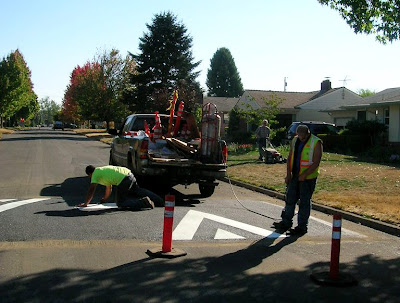 The location is on some bikeways, and with the traffic calming, Evergreen may now be even better for bicycling. Ellis is also an important east-west route with connections to a school and park. 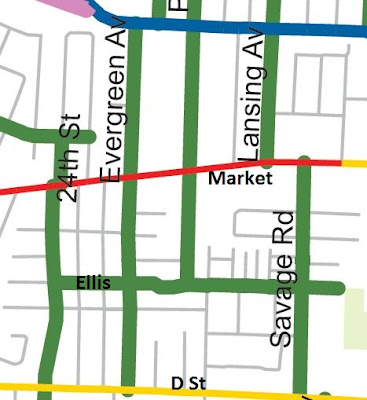 Just to the east of Evergreen, and unlike Evergreen, Park street has a traffic light, which is critical for crossing Market street and connections north-south.  It will be interesting to see if perhaps with traffic calming on Evergreen, Park will gain more traffic and become less comfortable. It already has a couple of right-angled jogs, and some car drivers take the turns too quickly or tightly.

In any event, projects like this might also consider the installation of sharrows and a 20mph speed limit.  You may recall HB 3150, which created the 20mph designation.  Portland is using it extensively and it could be a tool in Salem neighborhoods for traffic calming.

Neighbor complaints about car speeds were driving this installation, as I understand it.  At some point, hopefully, in some places we'll turn from a negative, complaint-driven process to a pro-active process, making things easier for people who bike.  It will be great to see the City install traffic calming to benefit people who bike before there's a documented pattern of complaints about people in cars.

Further north, a new dental clinic just off Lancaster is going in. 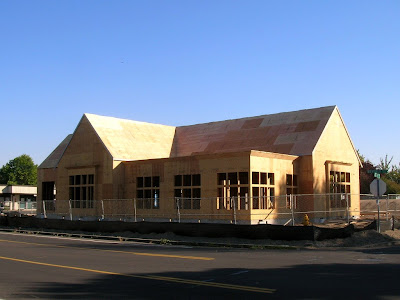 It was notable because it fronts the sidewalk and corner, instead of having a big setback, and has the parking in back. The entry may still be off the parking lot, it looks like, but this is a step towards a more walkable configuration. Plus the nice gables! Flat roofs are dumb in Oregon rain!

Interestingly, another recent dental clinic out south also has gables, but it is set back and the parking lot fronts the street. 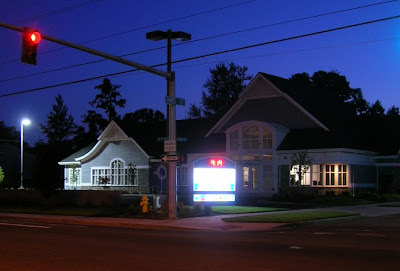 Hopefully these two buildings represent a shift in thinking and building siting in favor of more walkable configurations.
Posted by Salem Breakfast on Bikes at 12:01 PM

I still think Englewood is the better connecter between 23rd and Park. Using Ellis means having a stop sign on Evergreen (Englewood doesn't have to stop on Evergreen), and when one gets to Park on Englewood, there are clear sight lines for pulling out onto Park.

The jog at Ellis and Park--as well as trying to follow the law on a bike and actually stop before proceeding eastbound on Ellis, while auto traffic continuing southbound on Park doesn't have to stop and is thus trying to take the turns in Mario Andretti style--is confusing and makes this un-ideal.

Perhaps these bumps will affect all this, but I still think the bike plan for this area of town reflects decisions made by people who don't bike, or who have a more "theoretical" understanding of biking.

At the same time, as you point out, contending with the "Mario Andretti" style turns on Park makes the route far from ideal - especially for kids.

The routing here is almost certainly in important ways provisional. The signage was funded by the energy grant on a time-line, I believe, and it is quite possible that with more reflection a better set of routes, signage, and traffic controls could be designed.

You should write up and blog about an alternative proposal!

I've got to learn how do those cool maps and lines from you first! But, I'm interested in the idea. I just don't like the idea of kids trying to deal with the complexities of the Park & Ellis intersection, mostly. I try to avoid it most times. Good to hear about the provisional nature of this, though. You are a fount of information.