The canard still has traction, and with folks mobilizing to put a licensing measure on the ballot, it's likely we'll be hearing more about it. 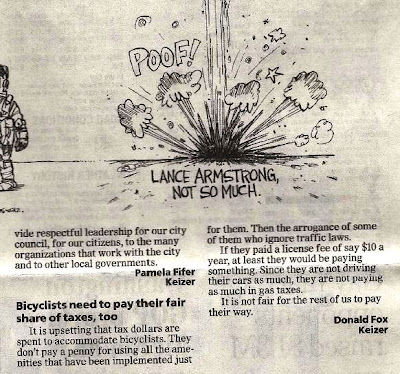 In Thursday's paper, ironically next to an editorial cartoon noting Lance Armstrong's fall, Donald Fox of Keizer says,"It is upsetting that tax dollars are spent to accommodate bicyclists.  They don't pay a penny...It is not fair for the rest of us to pay their way."

In response, Gary notes that


Salem, Keizer, and Marion County all get far more of their funds for roads and bridges from local property taxes than the gas tax. Salem residents are now paying off a $100 million bond measure for streets and bridges.

But many people aren't interested in the facts and just talk past the observation.

There are lots of other solid ripostes in the rhubarb that is the online comment section.   Curt observes that talented people who work in Salem often choose to live in Portland for the quality-of-life, among which mobility choice is high on the list, and that Salem misses on their spending and property taxes.  Doug, of course, has written at length on the canard (here and here).  And at least one Oregon economist has argued seriously that "the appropriate public policy is to subsidize bikes, not tax them...Public economics teaches us that to get an efficient amount of economic activity that has externalities you have to get the price to reflect the true cost of the activity. In this case the true cost is less than the price of a bike.."

As has been written about at BikePortland, there may be an attempt to get a licensing/tax measure on the ballot.  I suspect that we'll be seeing more of this issue in the next year.  So is it a mistake to take note of these things?  Or do we need to respond even more vigorously to them?

(Interestingly, the online comments, which are in facebook, and presumably owned jointly by facebook and the writers, all will disappear into the SJ archive along with the article, as if the SJ also owned them.  How to archive online discussion like this?)
Posted by Salem Breakfast on Bikes at 7:45 AM