(This may not be very interesting. But now that we know some sentiment is for 4D, we can look at this alternative in particular.  This note is just long passages lifted from the document titled "Draft Section 4(f) Evaluation for the Salem River Crossing Project (prepared in tandem with the Draft Environmental Impact Statement)"  and other chapters of the Draft Environmental Impact Statement.

In a subsequent post there may be more to say about particular passages or with outside illustrations that better show the impacts. Still, this is the official statement of the planning process, not some whackadoodle sputtering by those of us who might think it's a bad idea.  For the moment, it is sufficient to draw attention to the meaning of "prudent and feasible alternative," the weight of required preservation efforts and harm reduction, as well as the scope of impacts that are ostensibly considered reasonable.)

What is Section 4f?


Section 4(f) of the Department of Transportation Act of 1966, codified in federal law at 49 U.S.C. 303, declares that “it is the policy of the United States Government that special effort should be made to preserve the natural beauty of the countryside and public park and recreation lands, wildlife and waterfowl refuges, and historic sites.”

1. There is no prudent and feasible alternative to using that land; and

2. The program or project includes all possible planning to minimize harm to the park, recreation area, wildlife and waterfowl refuge, or historic site resulting from the use.

The construction of Marine Drive would incorporate a thin strip of land from the western edge of the park between Glen Creek Road NW and a point adjacent to the existing softball field complex. The impacted area is landscaped with trees and grass. Footings for the proposed overhead OR 22 Connector viaduct would be placed in this impacted area.

Alternative 4C would have only minor impacts on the attributes and features of the park that qualify the park for Section 4(f) protection. As described earlier in this section, the park’s main function is to provide for active recreational use. The primary active areas of the park (ball fields, a boat launch, a canoe launch, and walking paths) would not be adversely affected under Alternative 4C. This alternative would have no impact on the passive recreational functions of the park (picnicking and swimming).

Alternatives 4C, 4D, and 4E would not entail a permanent incorporation of property from the Union Street Railroad Bridge Pedestrian and Bicycle Trail. As depicted in Figure 3.1‐11 (shown earlier in Section 3.1.2), the impact area is associated solely with elevated structure (the proposed OR 22 Connector viaduct). The installation of piers to support this structure would not be placed on trail property and the elevated structure above the trail would have 10 to 15 feet of vertical clearance from the trail, thereby not necessitating the conversion of any trail property nor impeding the trail for users. The trail would pass beneath the elevated roadway structure for approximately 85 feet. Therefore, a permanent Section 4(f) use would not occur at the Union Street Railroad Bridge Pedestrian and Bicycle Trail as a result of Alternative 4C, 4D, or 4E actions.

The construction of Alternatives 4C, 4D, or 4E might necessitate the temporary occupation of the Union Street Railroad Bridge Pedestrian and Bicycle Trail during project construction. Part of the trail on the west side of the river would potentially need to be closed to users during the installation of overhead structure (the proposed OR 22 Connector viaduct). It is anticipated that the trail would not need to be closed for a period greater than 10 days. To meet the Section 4(f) statute’s temporary occupation exception criteria (specifically, 23 CFR 774.13[d][iii], which notes that the project cannot cause “interference with the activities or purpose of the resource, on either a temporary or permanent basis”), and thereby avoid a Section 4(f) use because of temporary occupation, the project would need to create a temporary detour for users that would allow for the continued continuity of the trail during construction.

Therefore, pending resolution on the Section 4(f) statute temporary occupation exception criterion discussed above, it is concluded presently that Section 4(f) use of the Union Street Railroad Bridge Pedestrian and Bicycle Trail 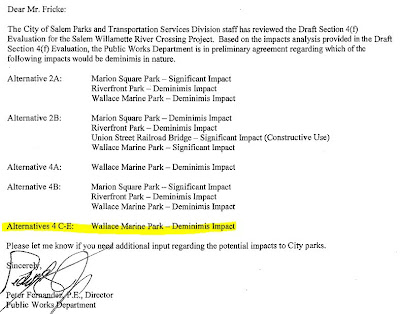 Right of Way and Rupture in the DEIS

The estimated cost to acquire right‐of‐way for Alternative 4D is $88 million (in 2015 dollars). This estimate is based on gross estimation, not actual appraisals. 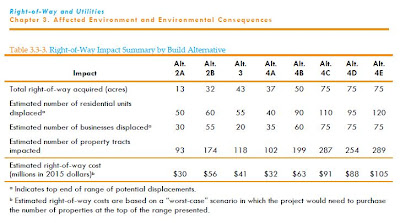 
The energy analysis shows that, in 2031, the operation of vehicles (automobiles and trucks) with the No Build Alternative would use more energy than with the Build alternatives (Table 3.17‐2). This is primarily because, compared to the Build alternatives, the No Build Alternative would have increased vehicle volumes, lower travel speeds, and longer travel distances in the study area....

For more on the River Crossing see a summary critique and all breakfast blog notes tagged River Crossing.
Posted by Salem Breakfast on Bikes at 8:00 AM

Excellent work, SBOB. You are really helping me digest this massive (and for the newcomer, confusing) amount of material. Sounds like things are really drifting in the direction of "bridge, baby, bridge!"

Thanks for this great information, SBOB. I hope your readers plan to come to the NO 3rd Bridge Briefing on Sunday, November 4th, at 3 pm in Anderson A at Salem Public Library. Three experts will present information on the project and answer questions including a member or the project Task Force and a member of the project Oversight Team.