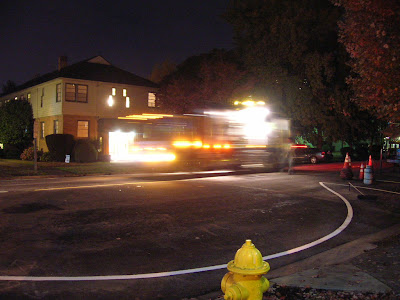 Perhaps with a break in the rain, it was possible to return to road striping, and here's some action on the RR crossing at Chemeketa & 12th. You can see the curve of the turn-around now. I was hoping to see them put down the bike symbol or sharrow or whatever they're going to use for the new bike crossing.

Here's the paint truck, with the big reservoirs of yellow and white paint! 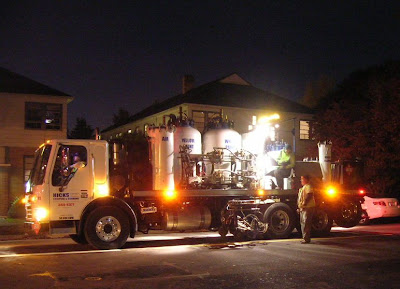 In this corner of the world, the City has nothing better to do than write press releases about bicycling awards, right?! 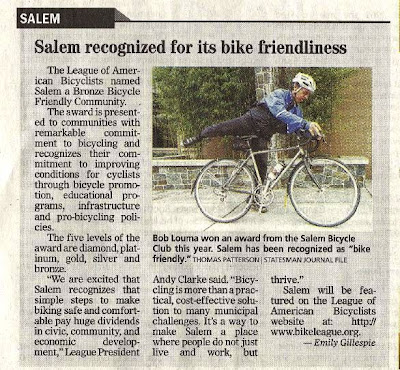 Yesterday they finally came out with last week's news and it's in the paper today. Check out Director of Public Works Peter Fernandez' quote at the end (which unfortunately the paper didn't include). I don't remember him commenting in 2008 on it! Even in a press release it was great to see.

The League of American Bicyclists has announced the latest round of Bicycle Friendly Communities (BFC) and Salem has been named a Bronze Bicycle Friendly Community. This award is presented only to communities with remarkable commitments to bicycling. Since its inception, more than 500 distinct communities have applied for the designation. The five levels of the award are diamond, platinum, gold, silver, and bronze. With this impressive round, there are now 242 BFCs in 47 states across America. The Bronze BFC award recognizes Salem's commitment to improving conditions for bicycling through investment in bicycling promotion, education programs, infrastructure, and pro-bicycling policies.

The decision to designate Salem a Bronze Bicycle Friendly Community involved careful review of the City's application, supplemental materials, and consultation with local cyclists. Salem will be featured with a profile on the League of American Bicyclists website at http://www.bikeleague.org/programs/bicyclefriendlyamerica/.

"We are excited that Salem recognizes that simple steps to make biking safe and comfortable pay huge dividends in civic, community, and economic development," said League President Andy Clarke. "Bicycling is more than a practical, cost-effective solution to many municipal challenges - it's a way to make Salem a place where people do not just live and work, but thrive."

The BFC program is aimed at helping communities evaluate their quality of life, sustainability, and transportation networks, while allowing them to benchmark their progress toward improving their bicycle friendliness.

Peter Fernandez, P.E., Public Works Director, states "We are proud of the pedestrian and bicycle infrastructure investments we have made over the years. We hope to make many more in the future."

Strangely, though, both the City's release and the SJ rewrite seem unaware that Salem was cited for a renewal and that there's already a featured profile. 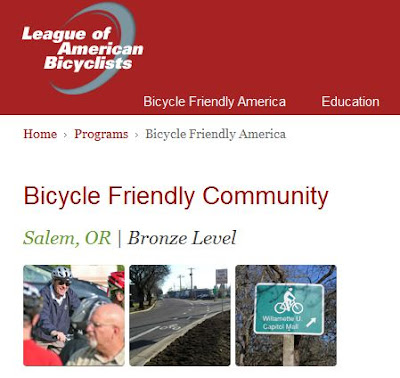 Next Tuesday at 9:00am, host Melanie Belle will have City Councilor Chuck Bennett and Cherriots board member Bob Krebs on her "Melanie in the Morning" show to talk about the Salem River Crossing. The show promises an "even-handed discussion about the need and the proposed solutions and to let folks know about the Nov. 4th presentation, and what they can expect if they go to Council on the 5th."

The show will be archived as a podcast and made available on the KMUZ website, hopefully before the 4th.

New Belgium is one of the few Platinum Bicycle Friendly Businesses, and employees get a cruiser after a year of service. They also use the bikes in branding and marketing. Over at Franklin's Bottle Shop, they're giving away a bike at the beginning of November. It's great to see bikes used this way! 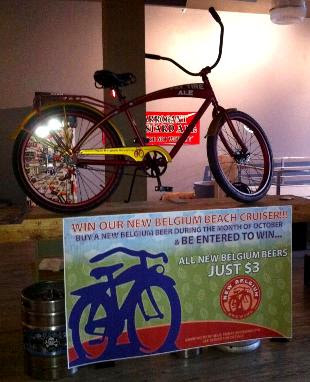