In less than a year the first print run of the new bike map is almost gone, and folks are planning a reprint! 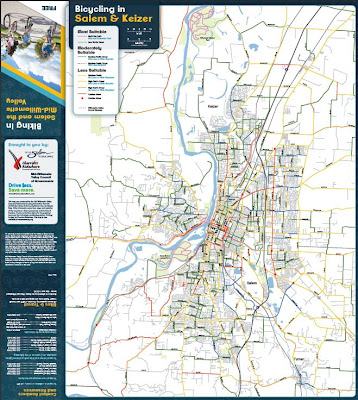 One of the reasons for a slightly smaller initial print run was to make incremental and/or iterative edits easier, and it looks like things are working as planned!

Ray Jackson from the Mid-Willamette Council of Governments writes:


The Salem/Keizer, Marion/Polk/Yamhill bicycle maps (aka “Biking in the Mid-Willamette Valley”) are scheduled to be republished by Cherriots Rideshare later this fall –most of the 3500 from the first printing have been distributed to public agencies, bike stores and on to the public in the three counties. The maps need to be modified to include the revised route for the Willamette Valley Scenic Bikeway, so this is an opportunity to do some other minor editing. If people have noticed any mistakes or omissions in the bike map, please send them to me for consideration by October 12, 2012: rjackson@mwvcog.org

They aren't looking for major edits or revisions. One thing that's been mentioned several times is that for someone not familiar with Salem or an area, there might be enough street labels to use the bike map as a primary navigation source - a second map with all street names has sometimes been necessary to find a store or an address. The scope of this change or others like it may be too big for this round.

But still! It's great the map is in circulation, that there's clear demand for it, and that there is a means for updating and printing.

(Remember, the electronic version is available as pdf, lower-res jpegs, and kml for the googleearth.)

Thanks Ray and thanks to Cherriots!
Posted by Salem Breakfast on Bikes at 10:00 AM