On Monday the Oregon Bicycle and Pedestrian Advisory Committee heard a presentation on the way the ConnectOregon program could fund bike/ped projects.

Previous rounds have allocated about $350 million to air, rail, and transit projects, and this year the new ConnectOregon V added bike/ped projects to the eligible list! 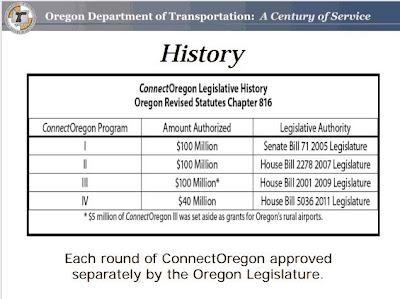 In this fifth round about $42 million will be available.

Applications will be due in late November of this year and after several rounds of review, awards made at the Oregon Transportation Commission meeting in August 2014.

One key component is that projects will not be in the road right-of-way or projects eligible for funding from the State Highway fund.

So this means we're talking things like shared use paths and bike parking! 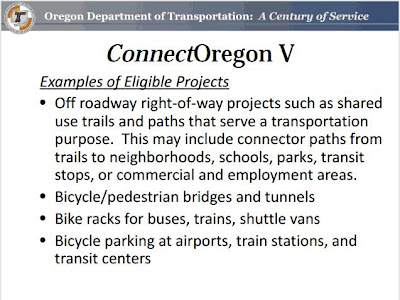 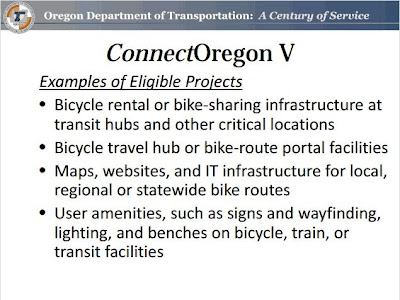 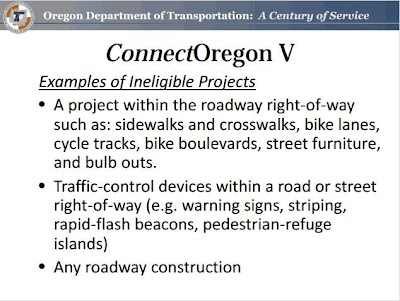 So what should Salem apply for? The new hub at the train station with Amtrak and Greyhound would look to be an excellent candidate for enhanced multi-modal facilities.

You may recall the announcement from last fall:


The Oregon Transportation Commission today approved a request to award $575,200 from the Transportation Enhancement discretionary account to preserve and restore the historic baggage depot at the Salem Amtrak Station for use as an inter-city bus depot, as part of a larger effort to create a multimodal transportation hub. Transportation Enhancement (TE) funds, which focus on projects involving historic preservation, bicycle/pedestrian access, roadway beautification, and more, will be combined with other funds to complete the TE portion of the renovation ($96,000 from an anonymous donor and $20,000 from the State Historic Preservation Office). Greyhound has committed $60,000 and the remaining funds will come from regular transportation investment programs and state matching funds. Total estimated cost of the project is $874,154 which includes about $691,000 for the depot restoration and $183,000 to reconfigure and improve access for buses, bicyclists and pedestrians....

By rehabilitating the facility, ODOT and its partners hope to create a regional multimodal transportation hub. Preliminary plans call for three phases of rehabilitation. In phase one, the building would receive extensive restoration work, including utilities, exterior wall finishes, restrooms, windows and doors. In phase two, the restoration would focus on the interior, such as bringing it up to compliance with ADA and building a ticket counter and waiting area. Phase three would include construction of bike and pedestrian access to the site and outdoor passenger amenities. Next steps include signing agreements with partners and retaining an architectural firm skilled in working with historic buildings.

Phase three looked a little thin, and maybe ConnectOregon V would be a good way to boost the $183,000 budget and create something more ambitious and first-rate.

On the Wallace side of the Union Street Railroad Bridge, there remains the railroad right-of-way where a crossing could be very helpful for people on foot and on bike trying to get across the vastness of Wallace Road.

Or how about a rails-to-trails conversion of the Geer Line just north of State Street.  Or maybe a segment of the Salem Greenway in West Salem.

Or what about a coordinated set of facilities for State employees to incent mode shifts from drive-alone car commutes.

It will be interesting to see what kinds of projects apply for and what kinds of projects ultimately win awards in this program. Areas, like Portland, with stronger regional planning for biking and walking will likely have a much larger slate of eligible projects. The requirement that projects not be in the road right-of-way may put things like Portland's Intertwine at a real advantage. It's also a reimbursement program, so projects have to have money available to front the costs.

What's your favorite project idea? - especially ones in Bike and Walk Salem and the new Parks Master Plan.
Posted by Salem Breakfast on Bikes at 6:30 AM