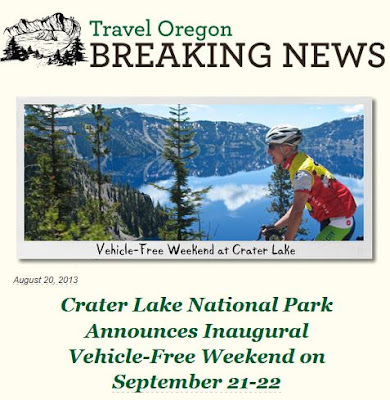 The focus here in on commuting and the urban form, but this is really something.

After a trial run earlier this year that was a smashing success, Crater Lake is having a car-free weekend every year!


Crater Lake National Park Superintendent Craig Ackerman announced today the inaugural Vehicle-Free Weekend at Crater Lake to be held this year Sept. 21-22. The park plans to preserve every third weekend in September as an annual opportunity to highlight non-motorized use of the park.

“In June, Crater Lake National Park, Travel Oregon and Cycle Oregon collaborated to open Crater Lake’s East Rim Drive to non-motorized traffic for a first-time trial,” said Ackerman. “After an outpouring of positive feedback from the many people who participated in this rare opportunity, we decided to make it an annual occurrence.”

Under the plan, East Rim Drive will be open to non-motorized vehicles only (except for administrative and emergency vehicles) from North Junction around the East Rim of Crater Lake all the way to the intersection at Crater Lake National Park Headquarters and the Steel Visitors Center. Hwy 62 through the south end of the park, West Rim Drive and the North Entrance Road will be open to vehicles. Regular parking areas will be open, but generally fill up quickly. Normal park entrance fees apply.

How great is this!
Posted by Salem Breakfast on Bikes at 6:30 AM