Oversight Team Hears about Land Use and Exceptions; Third Bridge may be Difficult

Although the Columbia River Crossing has seemed to be the Dr. Evil to Salem's Mini-Me, in one important way, the Salem River Crossing is different, and this difference adds a new wrinkle that never appeared, I believe, in the CRC maneuvering.

The wrinkle has been pointed out before informally in conversation, but it is not discussed formally in much detail in Chapter 3.2 on Land Use of the Draft Environmental Impact Statement.

The key fact is that the proposed location for the giant bridge and highway is largely outside of the Urban Growth Boundary of the Salem-Keizer metro area.

By contrast, the CRC is inside the Portland UGB.  Being outside of the UGB adds some regulatory hurdles to the Salem project, and on Wednesday, the Oversight Team heard from the Department of Land Conservation and Development on this.  (N3B has some preliminary notes on the meeting and the approval for additional study and a quasi-supplemental DEIS on the "Salem Alternative.") 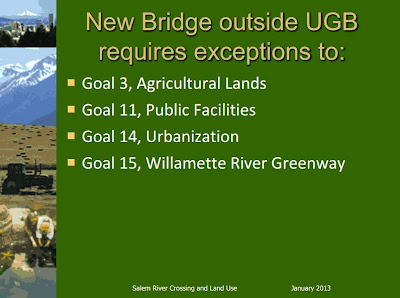 A new bridge would require four exceptions to the Statewide Planning Goals, and the presentation outlined the criteria and approval conditions for these kinds of exceptions.

The standard for approving exceptions is three-fold:
And in evaluating exceptions, there are also three factors to consider:  Cost, Operational Feasibility, and Economic Dislocation. 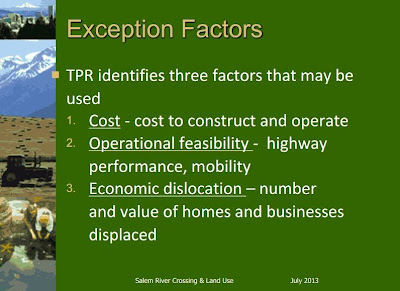 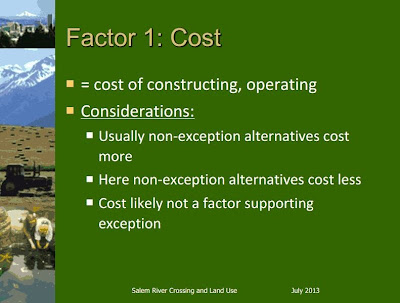 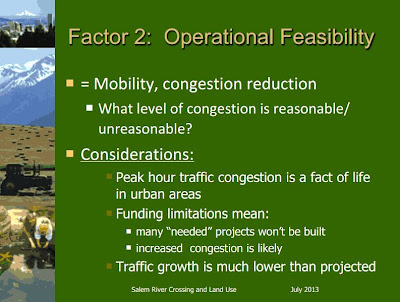 Drilling into detail will be necessary to make sense of this outline. (Perhaps readers with more experience in land use matters can say more?) It will be interesting to see what the official project response is - will they try to make an end-run and just try to enlarge the Urban Growth Boundary?

But the exception criteria look pretty high and difficult to meet.

Still at any number of other decisions points, plain language and common sense would seem to have erected a bulwark against the project's oversized ambition, but we have seen how the ordinary meaning of language is insufficient to check momentum.

So is there magic here that, for example, is not in Salem's Comprehensive Plan?


12. The implementation of transportation system and demand management measures, enhanced transit service, and provision for bicycle and pedestrian facilities shall be pursued as a first choice for accommodating travel demand and relieving congestion in a travel corridor, before widening projects are constructed.

13. The Salem Transportation System Plan shall identify methods that citizens can use to commute to work and decrease overall traffic demand on the transportation system. Such methods include transit ridership, telecommuting, carpooling, vanpooling, flexible work schedules, walking, and bicycling.

18. The Salem Transportation System Plan shall identify methods that employers can use to better facilitate the commute of their employees, encourage employees to use alternative travel modes other than the SOV, and decrease their needs for off-street parking.

Observers of the process will likely hold some skepticism. But here also are potential grounds for legal action should litigation at some point become necessary.

Stay tuned!
Posted by Salem Breakfast on Bikes at 12:01 PM

Good analysis. Thanks for focusing on this under-appreciated aspect of Third Bridge planning.

I don't know much about getting exceptions to Oregon's land use goals. But our state's land use system wouldn't be as successful as it is if exceptions were easy to come by.

I do know, from both direct experience and lots of reading of land use cases at the Court of Appeals and LUBA levels, that the Oregon judicial system is very competent at assessing how a project meshes with land use laws.

Circuit courts may make some screwy decisions. But once you get to the Court of Appeals, or LUBA, the judges know what they are doing. Third Bridge proponents are going to be able to get by with smoke and mirrors, like they've been able to semi-successfully so far.

Great post SBOB. Better coverage than the S-J, AGAIN. The S-J didn't even mention the presentation by DLCD which might have been the most important part of the meeting the other day. There is no way to show that there are "no reasonable alternatives that do not require an exception." Alternative 2A in the DEIS adds three lanes to the existing bridges at a cost of about $150 million as I recall. Case closed.

DLCD did include many of these points in public comment on the DEIS - so presumably the project team will have to have an official response to them. Here's an excerpt:

"Include sufficient information to support land use approvals. The State Agency Coordination (SAC) rules in Oregon Administrative Rules (OAR) chapter 731, division 15 describe how land use requirements are addressed in the planning process required by the National Environmental Protection Act (NEPA). OAR 731‐015‐0075(2) provides: Goal compliance and plan compatibility shall be analyzed in conjunction with the development of the Draft Environmental Impact Statement or Environmental Assessment. The environmental analysis shall identify and address relevant land use requirements in sufficient detail to support subsequent land use decisions necessary to authorize the project....Any alternatives thatpropose transportation improvements on rural lands outside the urban growth boundary (UGB) would require exceptions to Statewide Planning Goals 3, 11, and 14. Specifically, the DEIS and Land Use Technical Report indicate that all of the proposed build alternatives, except for Alternative 2A, would require goal exceptions to Goal 3 (Agriculture), Goal 11 (Public Facilities), and Goal 14 (Urbanization). An exception to Goal 15 (Willamette Greenway) would also be required for the build alternatives (see section 6 below). The information, analysis, and findings provided in the Land Use Technical Report and the DEIS are not sufficiently detailed to support approval of the goal exceptions and other necessary land use approvals by local governments, which may include the City of Salem, the City of Keizer and Polk County."

Thanks for the notes, anon!

Here's the link to the public comments, btw