Get off my Lawn! A Generation Gap at Riverfront Park? Newsbits

In his column yesterday, "Connecting the Dots," Dick Hughes makes some great points about a generation gap in our attitudes towards planning and development.


The City Council might not want to admit it, but what I observed in watching Monday’s meeting was a generation gap. It mostly was people my age — grandparents and great-grandparents — declaring what would be best for younger people.

But not to put too fine a point on it, he misses one basic fact:

Hill Architects was engaged for the design of the park parcel and here is how they self-describe their expertise:

Next door, another so-called "key" piece in the development is a nursing home.

There's a mismatch here.  And it's not simply between the young and the old.

There's also a gap between the design that's on the table, and a vibrant urban one.  A better design - and it's not too late for one! - can accommodate concerns about the Carousel and traffic, better knit the project with downtown, and create a more energetic mixed-use project that will attract the enthusiastic interest of younger adults.

Other Dots to Connect

The all-or-nothing stances is alarming, too.  Just because a person might oppose or have serious questions about the particular project details that are on the table for Boise doesn't mean that person also opposes the whole project or a big project at the Boise site in general.  Don't dismiss criticism of design and plan by calling it total opposition - it's not just concern trolling!

Also, as commenters have pointed out, there's a generational gap in the analysis of the Third Bridge.  Young adults are clearly driving less!

(Not really mentioned in the piece are real structural problems with governance in Salem and in general.  If you rely on the bus, you can't go to City Council. Latinos, young people, and the car-free are at a distinct disadvantage.  So the generation gap and other problems of representation aren't just on this particular issue.  But that's a whole 'nother topic.)

Current President of the Salem Bicycle Club Larry Miles had also a piece.  That was nice to see! 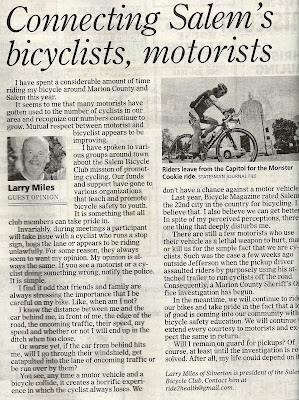 Even though I've changed my mind about the Boise apartments, I really thought Hughes made some important points. Those who want to extend the park "for future generations" don't seem too concerned about what the next generation really wants. The Carousel is nice enough but my kids and I prefer Director's Park in Portland.

The story of Salem's stagnation is goes beyond just the City and the Chamber.

"If you rely on the bus, you can't go to City Council."

I get real tired of hearing our City Councilors brush off the transit problem in Salem by saying, "Sorry, not our responsibility." As community leaders elected to improve our community it is their responsibility. Just because they don't run the transit system doesn't mean they can't work with the Transit District and exercise their leadership. I'm waiting for a candidate for Mayor or City Council who says they are going to work to improve our woeful transit service in Salem as a top priority.

I'm thinking that the only solution at this point is to dissolve Cherriots as an entity (Salem-Keizer Mass Transit District) so that a successor can be created without the intentional crippling birth defect that the powers-that-be got into the mix when it was formed: a prohibition on any form of payroll tax.

I have real problems with payroll taxes in general, having to do with believing that it's better to tax wealth (property) than work/income, but given the way that the incentives are set up, with the auto-centric gas tax enshrined in the Oregon Constitution as only for "highway purposes," the only way to make transit work is some form of equally robust financing system that operates in background and provides adequate funding. Cherriots will never be anything but a stunted and emaciated system, because it's designed that way.

The meta-concept we need, the overriding policy goal of all these individual decisions should be this: Everyone has a right to live in a society that is designed and operated to ensure that everyone, (rich/poor, young/old, handicapped/not) can participate fully in all aspects of life -- the economic, social, and civic life of their community -- without having to own or use a car. Until that is the agreed goal for all governments at every level, we're going to continue seeing agencies working at cross purposes, with the "transportation" agency working to raise "levels of service" (more cars, faster), even as other agencies are going bankrupt trying to deal with the externalities of cars.

Director's Park is an excellent example of more active edges and a more interesting center!

It's funny that it came to mind to you too. (Here's a note from February 2012 on the warehouse shell that also mentions Director's Park.) Salemites should definitely think about why Director's Park works and how we can adapt its structural elements to energize Riverfront Park and the Boise edges and public spaces.

It was nice to see in Salem Weekly a short piece about Corvallis' fareless system. Transit as you two say definitely needs to be more front-and-center!

Updated with one striking image of a generation gap, or demographic skew, if you prefer.

Thanks for the pic. Pretty easy to see why Salem is stuck in the 50's

Walker says: "Everyone has a right to live in a society that is designed and operated to ensure that everyone, (rich/poor, young/old, handicapped/not) can participate fully in all aspects of life -- the economic, social, and civic life of their community -- without having to own or use a car."

No one is working harder against that ideal than the downtown parking lobby. In Salem, parking is treated like a human right and a public good while walking is an amenity. That is why in Salem we can only address the needs of people after the cars have been satisfied.

Here's a neat photo essay on an event in Director's Park. Maybe fashion's not your thing, but the gathering of people and the way the park was used is easily transferred over multiple kinds of activities -