Weekend Fun: State Fair and the Novice Ride at Ankeny 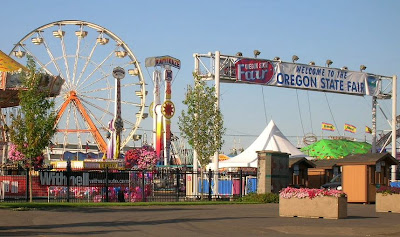 The Fair starts today, and riding a bike's always a fun way to go. Even though parking a car is free, usually it's easier to get there by bike, and there's much less parking hassle.

Like the last couple of years, they aren't obviously marketing the bike parking with a discount or anything. That's too bad. But biking's still easier than messing with the car traffic and parking!

It'll be interesting to see what the new corporation does with things in the future.

Here's a map with the bike parking on 17th street. Be sure to bring your own lock! 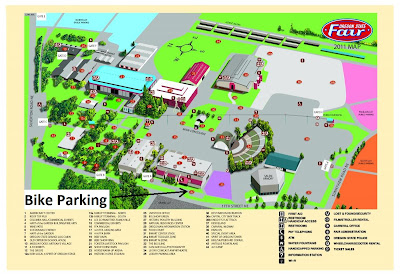 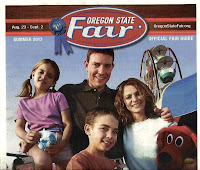 Interestingly the full program inserted in the SJ had a couple of ads with bikes.

I can't remember the programs of years past, but things like this usually stand out, so I'm inclined to think this is new - do you know or remember?

The ads are for recreational biking, but they are also from quarters not really affiliated with Portland, with hipsters, or with urbanism.

So this is an interesting little thing to note - maybe a small sign of the continued mainstreaming of bicycling.


(Speaking of ads, did you see and hear the completely wonderful Google Doodle for Debussy yesterday?!  Though Debussy was active during the era of the safety bicycle and early auto - the suite that provided the soundtrack's movement was composed between 1890-1905 -  the doodle somewhat anachronistically included a high-wheel, which probably wasn't being used a whole lot in the early 20th century when the cars in the scene were also being used.  So, you know, they romanced the high wheel a little...)

An "outdoors best bet," the bike club's novice ride is on Sunday!

A short ride of around 10 miles, and aimed at practicing and learning new skills on super low-traffic roads, it starts at 2:30pm at Ankeny Wildlife Refuge.


This ride is a slow-paced ride on low-traffic roads for novice cyclists. The ride starts at the seasonal wildlife viewing blind on Wintel Rd, 0.1 mile west of the Marlatt Rd intersection.