Tonight the Hearings Officer will deliberate on a site plan review, conditional use permit, and design review of a proposed 54-unit apartment complex located just south of Mission and 23rd.

Last summer a much larger complex was proposed and ultimately Council redirected the developer. 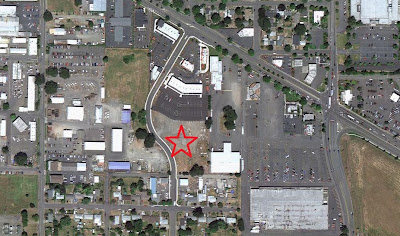 It's back, and the Staff Report notes some of the changes, while also not recommending approval:


The request includes a reduced number of dwelling units from the January 2012 proposal from 96 to 54, and includes a non-residential office building. Access to Oxford Street SE is not proposed with this application.

Staff recommends that the Hearings Officer DENY the request...

Mission Street here is a State Highway, and it is so auto-oriented.  This is not a good place for a traditional auto-oriented housing development.  It's also by the airport, and both the neighborhood association and the airport/FAA have concerns about the site's fitness for more residential housing.   The neighborhood lacks a grocery store also.

Notice the person on bike going opposite traffic (they're on the sidewalk, though, not in the bike lane) and the right-in, right-out treatments for 23rd, the cross street. There's really nothing multi-modal about this road. It's a highway.  (It's a stroad!)

If we want to create higher density housing in lower-car and more walkable configurations, this is not a good project yet.  The neighborhood association feels development at this site should be more commercial or industrial and not primarily residential.  At the very least it should have some kind of mixed-uses - not more of the same.
Posted by Salem Breakfast on Bikes at 7:00 AM