So What about that Urban Land Institute Report on Boise and the Carousel?

Good for architect Geoffrey James for putting out some ideas for a revised approach to redeveloping the Boise Property.

His first two points are:
As others have pointed out, in at least one important way, his vision differs from that of the Urban Land Institute. Points 1 and 2 are, if not contradictory, at least in tension.

The panel believes one of the most exciting opportunities for both commercial and public space development may be presented by the Boise truck parking lot...

The panel suggests that perhaps the most effective way to activate Riverfront Park and to provide economic stimulus to downtown Salem is to extend the central commercial spine along State Street into Riverfront Park. As conceived by the panel, the new South State Street extension would begin at the intersection of State and Front streets, with an enhanced signal and public safety system provided at that busy spot. The extension would continue across city owned land past the carousel through the existing public parking lot and the Boise site to terminate at a roundabout in a new Great Lawn at Pringle Creek. Twin pedestrian pathways would extend across the lawn to pedestrian bridges, one crossing Pringle Creek parallel to the Portland & West-ern railroad tracks, and the other passing around the Eco Earth Globe to the long-proposed bridge to Minto Island.

Along the new South State extension would be twin four-story structures lined with 18,000 square feet of small shops, restaurants, and entrepreneurial business spaces, with 50 residences located on the upper floors of each building. The retail space could offer perhaps two or three signature waterview restaurants with outdoor seating during nice weather, with the remainder devoted to small owner-operated businesses sized so as not to compete with the established downtown retail district. Parking for 250 cars would provided underground, with an additional 60 spaces provided inside each residential building.

The new South State extension itself could provide vehicular access to the Great Lawn during less busy periods, and, when closed to traffic, used as a new home for the Salem Farmers Market. Each of the new residential units, averaging 1,200 square feet, would offer city, park, or water views, and have the amenities of downtown Salem and three exceptional city parks right at their doorstep.

Not getting much attention, perhaps justly so since using the Oregon Electric lines for commuter rail has not seemed like a preferred alignment in the current rail planning process, is a proposed train station and plaza with connections to the Conference Center:


The triangular parcel on the north side of the Boise property, currently home to the multistory concrete Fry Warehouse [now demolished], is proposed by the panel as the site of a future commuter rail station.

The existing curb cuts could be used to provide access to a driveway for passenger drop-off, shuttle bus service connecting to other downtown points, and taxi services. A linear pedestrian plaza could connect the proposed station to the Commercial and Front Street intersection, with the Old Mill Building offering the potential for development of shops and small cafés that spill out onto the plaza in good weather. At the railroad tracks, an elevated pedestrian bridge could connect the station to a northbound station platform and to Riverfront Park beyond.

Not in the final report, but in a briefing, is a frank acknowledgement of the moat that separates downtown from the park - a moat formed by transportation corridors, including a state highway!

So the ULI report calls for multiple east-west connections across that moat.

Even if the rail station is abandoned, the plaza in alignment with Trade Street offers much stronger connections to downtown than does the greenway path along Pringle Creek, which goes too far south and skirts downtown.

So the question here is, if you abandon any development on the west side of the railroad, and make that into an extension of Riverfront Park, what does it mean to "Implement the ULI Plan in next two decades"?  Even if you think that "two or three signature waterview restaurants" would be overkill, and that we should hope for one only - that Salem wouldn't support more than one - where do you put such a restaurant on the east side of the tracks?

And how does that change the rest of the ULI recommendations?

It seems to me that once you abandon the development on the west side of the tracks, there's not much of the ULI recommendations left.

At any rate, at this stage it's not important for someone to have all the answers.  What is important is that there's more conversation - even just spit-balling - to see if some group of ideas will crystallize into a compelling and feasible vision.

And in addition to thinking about "what" goes there, we need to think more about "how" connections are made across the moat to downtown - Front Street has to be included, not just the railroad.  If it's not easy and attractive to walk between downtown and the park and development, the development will not fully flourish.

A commenter references the "old mill building," and I think I have a photo of it from Front street during the demolition phase.

These trusses don't look like something from the 1880s to me, and the footprint of the building doesn't at first glance appear to be the same on both the 1895 and 1926/27 Sanborn maps.  So I'm not sure the "old mill building" discussed in the ULI report is actually from the 1880s.  I'm thinking more 1920s.  Still, it would be interesting to learn more from Mountain West on why they decided against adaptive reuse for it.

The paper yesterday had a photo of an "old mill building" that I saw a few years ago and have been trying to find! I swear Mission Mill did a "can you identify this?" game on their blog, but I could never find it. 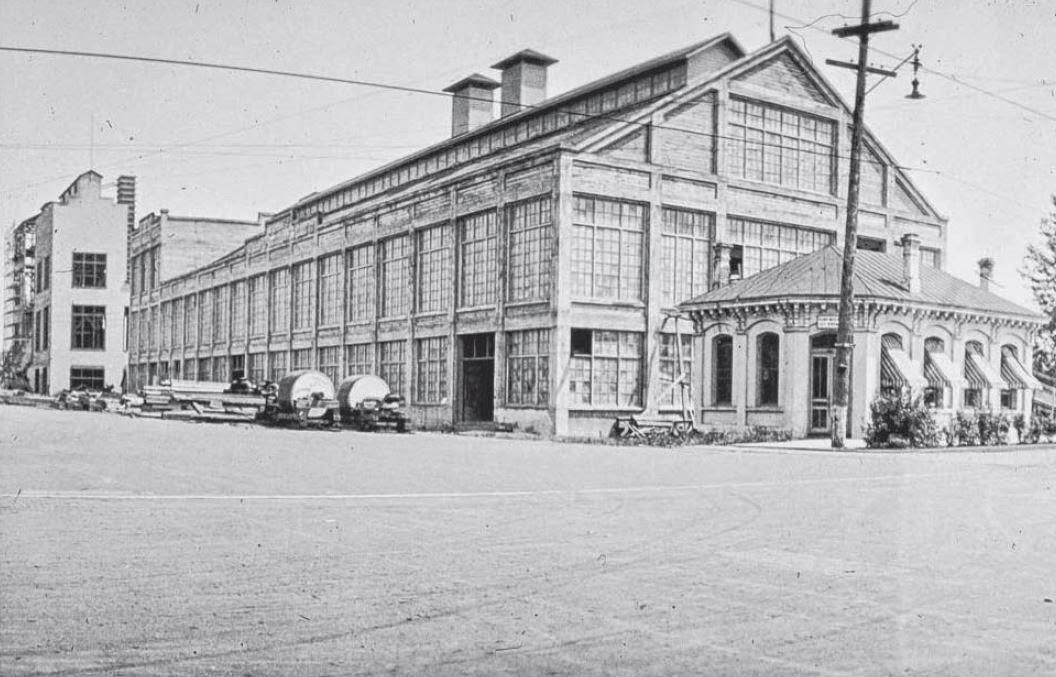 There's actually a small sign on the corner-facing door on the single-story office, but the photo here is not scanned at high enough resolution to say if it is reversed.

If this is true, the exposed truss from the demolition comes from the back, far end of the building in the vintage photo.

In any case, the 1895 Sanborn map of the flouring mill (lumber hasn't taken over here yet) also shows a single story office building that closely matches the office in this image. The length of the warehouse does not match, but the elevator and mill burned down in September of 1899, and the vintage photo shows a warehouse that looks in style to be from later than 1895, so that detail checks out. The report on the fire says the office was saved, so that would have lasted into the early 20th century. (See here for a postcard image of part of the old flouring mill.)

This identification of the warehouse and truss system is not determinative, but it is certainly very possible and even likely. Perhaps more in another update.

Here you go, thanks to D. Davis and Anon in the comments!

There's another portion of the ULI report that has also been lost: The Old Mill Building:

"The Old Mill Building, assumed to be the first building on the site, was constructed in the late 1800s and features a dramatic wood-truss ceiling on the upper floor, with clerestory windows now blocked by wooden panels. The enormous former window openings, now blocked with concrete block and aluminum-siding infill sections, could provide dramatic views across the Willamette Slough to the river and beyond in an adaptive-use development."

This was demolished along with the other pieces on the north block.

It may be, in fact, that out of five conceptual parcels the only piece of the ULI report that remains in play is the "south warehouse" - and this might be in truncated form since it appears that the "paper factory" sub-piece has also been demolished.

I agree, there should be more discussion about how much of the ULI report actually remains possible.

(It is also interesting that back in 2006, the report authors could say "The parking system is supported by taxes on downtown businesses, but is significantly underfunded and unable to support required maintenance improvements to the garages." If the city has been lying about downtown parking, they've been doing it for a long time! The more likely interpretation is that the city is telling the truth about parking.)

Thanks for the info! You're right that the old mill building also is gone - and that many of the concepts in the ULI report are no longer possible.

The Historic Landmarks Commission - and historic preservation community in general - does not seem to have considered in much detail, if at all, the mill building or other older structures on site. Maybe they were too far gone - having lost "integrity" as they say.

(Thanks also for the bit on parking.)

updated with photo, provisionally identified as the "old mill building," though it burned down in 1899, so the oldest building referenced in the ULI report seems like it has to be from the early 20th century.

I think you're on to something. Here's a crop of the original flipped:
http://i.imgur.com/XUxqvhj.jpg

Oh yeah! I think the sign says "Oregon [&] Pulp Paper Co." which was indeed in Salem - according to the Salem history site, it started at the Boise site in 1920.

Yes. It can be confirmed. Here are two relevant images:

2) the same scene, but likely wrongly dated to 1920 instead of closer to 1930 after the office was torn down -
http://photos.salemhistory.net/cdm/ref/collection/mchs/id/204

Thanks all for the comments and links! They really helped to nail it.