St. Mark's Celebrates St. Francis with Lectures on the Environment

Pope Francis is everywhere in the news these days, and you don't have to be Catholic to be intrigued by the audacity of taking on the name of the most universally loved saint. That's setting a high bar for yourself!

And it also no doubt raises the visibility of those themes closest to St. Francis, two of which are obviously animals and the environment.

Turns out the Feast Day of Saint Francis is Friday, October 4th, and St. Mark's Lutheran has structured what looks like it could be a fascinating series of lectures around the feast.

As part of their Visiting Theologian progam, Dr. Barbara Rossing will talk about Christianity, ecology, and environmental ethics.  The first talk today, on Thursday the 3rd, will be in Corvallis at OSU, and the Friday and Saturday talks will be in Salem at St. Mark's.  (See the schedule or brochure for full details.) 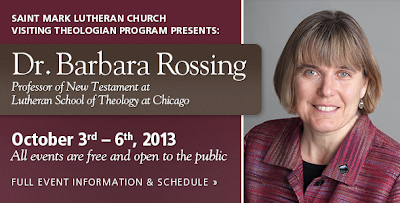 OSU LECTURE TOPIC: St. Francis Goes Swimming with the Salmon: Ancient Wisdom for a Planet in Peril
Rossing’s appearance coincides with the annual Christian observance of St. Francis of Assisi (Oct 4th) who is remembered, among other things, as patron saint of ecology. Known for her passion about care of creation and apocalyptic themes in scripture, Rossing will weave theological, environmental, scientific, and practical themes into her lecture.

FRIDAY LECTURE TOPIC: Saints, Angels and Climate Change: St. Francis Vision for Creation’s Healing
St. Francis’ joyful kinship with creation empowers us to face the urgency of climate change and global ecological crises today. Explore Jesus’ radical vision of the kingdom of God as renewal for all creation, as we join faith communities around the world commemorating St. Francis’ legacy. Hope for healing—not destruction—is the biblical vision for our future on earth.

SATURDAY PROGRAM TOPIC: On Earth as in Heaven: Finding Apocalyptic Hope
How do we address climate change and other environmental issues without getting depressed? The apocalyptic book of Revelation, written as a daring critique of the Roman empire 2000 years ago, offers a radical vision of hope that can help us face our future today. Re-claim Revelation away from the Left Behind narrative of doom and destruction to see God’s vision of hope. Revelation is not about what you think!

And about Dr. Rossing:


Barbara R. Rossing is Professor of New Testament at the Lutheran School of Theology at Chicago, where she also directs the seminary’s Environmental Ministry Emphasis. She is the author of The Rapture Exposed: The Message of Hope in the Book of Revelation and Journeys Through Revelation: Apocalyptic Hope for Today, as well as articles and book chapters on the Bible and ecology.

She has participated in international Lutheran World Federation and World Council of Churches consultations on theology and climate change, including LWF delegations to the United Nations Climate Change summits in Copenhagen (2009) and Cancun (2010), and a WCC delegation to the Alberta Tar Sands in 2011. She is a frequent Bible study leader at synod assemblies and ecumenical gatherings, as well as in the public media.

She has served as chaplain at Holden Village and Harvard Divinity School. She loves to hike and ski in the Cascade Mountains. She is currently writing a book on ecology and apocalypse.

Books on ecology and apocalypse could be very interesting indeed, as there is certainly a strand of Christian apocalyptic that views our existing world as irredeemably messed up and not worth saving, not even capable of being saved by human action. On this view it could be an expression of human arrogance to suppose it might be saved, and this strand depends instead on the cosmic rupture and restoration that happens by divine action in apocalypse.

On the other hand, sensing that this passivity (and the exploitation or carelessness it sometimes seems to generate) may not be quite right, and that the eschaton, the end-time Jesus seemed to promise, has been delayed first for a generation, then for empires, and now for millennia, there's a sense in which eschatology should be interpreted as something at least partially unfolding in history, here-and-now, and not something outside of history, deferred to that cosmic rupture. And an activity in which humans might be a partner.  Something along these lines - that critique of the "Left Behind narrative of doom and destruction" - might be the way she reads the Book of Revelation.

We try not to get too far into the weeds on religion here, but I don't think you'll need to be Christian to appreciate substantial parts of the talks. And given how important Christian symbolism - and even outright apocalypic - remains in American self-understanding and politics, maybe it is incumbent on non-Christians still to try to understand how Christians interpret themselves and the world.

In the end, in whatever way we understand our relation to Nature, to the Created Order, to Gaia - we must understand that human activities put our world - the world we hope to pass on to our children and grand-children - in great peril at this moment.

(And a hint...St. Mark's:  If I wanted to bike instead of drive, where would I lock up?  There don't seem to be bike parking facilities at the entry or visible anywhere near!

Maybe this is an opportunity to think about a campaign to encourage people to bike to church.  Weekday schedules are pretty packed, and maybe the family time and slower Sunday schedules offer a better time to experiment with biking instead of driving!

Not everyone will live close enough of course, but again for those trips of two or three miles, a bike is just right and for church-goers it can be part of a spiritual practice.  As the Upright Cyclist says, "Understanding the ordinary in life as possessing something extraordinary, mysterious, and indeed holy is at the core of the spiritual tradition I live in. Even one's commute is not immune to this insight...particularly when it is taken more at the speed of life and in the world in which I truly live.")
Posted by Salem Breakfast on Bikes at 7:00 AM