Let's start off with a tribute to Lou Reed, here asking maybe the most important question. Godspeed.


In today's paper there's a different note about loss, about the Cooke-Patton House, demolished for the State Library and Capitol Mall expansion after the Capitol fire of 1935.

The residents of the "Piety Hill" neighborhood north of the Capitol, both Salem's "upper class," and more "middle class," were an important part of the 24/7 purchasing power that kept downtown merchants busy and made downtown lively.*

Today the government offices empty at 5pm and on weekends, and don't nourish downtown in the same way. The remaining residential districts are father away, and people don't walk or bike or even drive to downtown very often.  Even if the distance is only a mile or two, for many it feels "far."

I don't think there's a direct lesson here for the Civic Center discussion, but as we talk about seismic retrofits for City Hall and the Library, we need also to be talking about how we invest in public space - how we formally organize places like plazas and landscaped ponds, streets and sidewalks, and how we configure informal spaces, even the spandrels and other interstices in the ostensibly "empty" spots between where we deploy new buildings or expansions.  Not just where do we put things, but how do they relate, and how do we move through them.

An inexpensive Police Station could yield a generic big box office building plopped on a large parking lot, out on the edges of the City.  By making the lowest-cost solution the goal, we might externalize other costs.  Some have pointed to Eugene's new facility, but it's on a frontage stroad across from a Country Club!  It's not connected to downtown and it doesn't look like you can walk or bike there very easily.  The $17M price tag looks attractive, but is it the Walmart approach to public safety and a good civic life?

Back in December 2011, in a public report to City Council, staff said


the subcommittee also discussed the additional annual operational costs that would arise from moving the Police Department to an offsite location. Operational cost increases would include considerable additional labor and fleet expenses for Police staff travelling back and forth to the Civic Center for court and meetings with other City departments. Other City staff would also require additional travel and fleet expenses to meet with Police at their new facility and there would be an incremental increase in facility maintenance costs for a new remote facility compared to a facility located close to other City buildings. In addition, acquisition of an alternative site would remove it from the property tax rolls and reduce annual property tax revenue. The subcommittee found that the increased operational costs and overall benefit of the central Civic Center site outweighed the increased initial capital cost of construction.

Here are two clips with preliminary costing from the report: 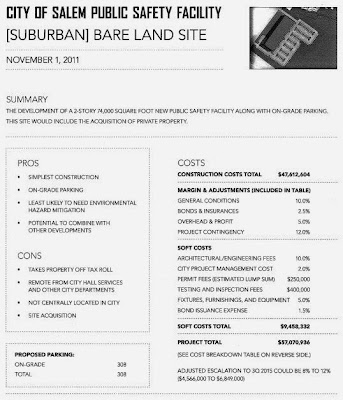 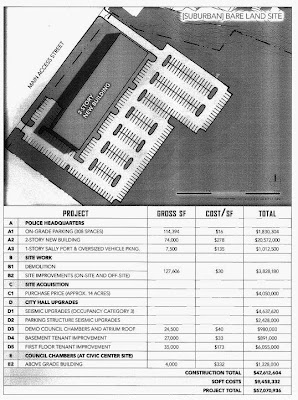 In addition to taking property off the tax rolls, the Civic Center also devastated a neighborhood.

It should be clear that the "suburban" bare land site is a bad idea.  The other concepts are much less obviously good or bad, and it's worth having more debate and discussion about them.  Two are perhaps more similar to the Eugene situation, although the City and architect consultants say they would cost significantly more than $17M.
But as we debate them, we should be sure to use - and critique - the best available information, and not merely speculate loosely about what might or might not be the case.

And as we consider the costs, we need make sure we consider costs not necessarily captured in the "initial capital cost of construction."  The Kroc Center failed to consider a lot of these other costs, and we're seeing how that turned out.

* Virginia Green has a series of slides on the displacements and demolitions of Piety Hill here.
Posted by Salem Breakfast on Bikes at 3:30 PM

What a brilliant post! Even though I frequently criticize Salem for being "stuck in the 50's", it looked like 1950's Salem was a lot more lively and dynamic than 2013 Salem.

In this debate, the Boise-Mt. West debate, and the parking meter debate, quality was never a serious issue. It has almost always been about the cost. Even when talking about cost, its just about the upfront sticker price and not about the externalized costs.

The Walmart analogy is right on too. Salem is a discount town and discount shoppers often end up paying more in the long run. If people want nice things that last and are resilient, they have to be willing to pay for them.

There's a response to the City FAQ posted online here.

I don't know if it merits a full response. About the SCI project, for example, it says "The public seem[s] to support a new Police Facility, but to rely on Eugene students for important advice seems bizarre, when the people of Salem were kept in the dark." Again, there was a large display in the main branch of the library, and Beth Casper wrote several articles for the SJ on the SCI project. The claim that Salemites were "kept in the dark" is plainly false.

As for the Eugene site: "The Eugene Police Chief is very pleased with his $17 million new 65,000 sq.ft. building and his 210 secure parking spaces. He says on YouTube it "is a perfect solution". Look it up. He said "ideally they would be downtown" but that would be "twice the cost to achieve". So do we want the $30 million wing plus a $30 million underground parking structure, all the way under a demolished Peace Plaza? Actually 200 basement parking spaces cost $20,000 per space so you should use $40 million for your garage you propose to extend all the way from Mirror Pond to right under our Peace Plaza."

As I read this, if the ideal solution was to be downtown, then the cheaper solution is actually not perfect. That's a substantial compromise to make for cost savings. The claim here is that, as with the Kroc Center, siting decisions that look superficially "perfect" actually harbor major hidden costs.

Thanks for the library video on a another failed siting decision!

I should have linked to the Ross Sign kerfuffle. It is interesting to think more on the ways a culture of the discount is more pervasive than we might want to think here.