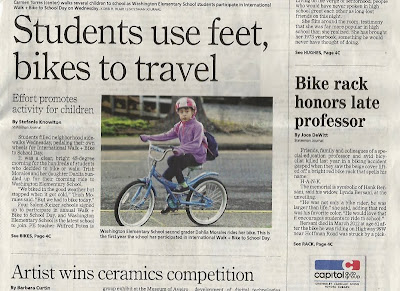 So it turns out that Washington Elementary School may be the epicenter of walking and biking to school in Salem!

Yesterday's Walk+Bike to School Day enjoyed nice coverage with a story and big photos on the front of the Mid-Valley section in today's paper.


Washington Elementary School students already walk in greater numbers than most schools around the district, according to a 2010 survey of 2,750 Salem parents. As many as 43 percent walk home, according to the survey. Poton hopes to boost those numbers and to make sure they’re doing it safely.

He often sees students arrive at school on bikes without helmets, he said, likely because families can’t afford them. He is looking for community partners, including the local fire department, to help fill that need.

So far his efforts to get students moving have paid off. As many as 300 students walked or biked to Washington on Wednesday, according to his count.

Washington Elementary School was one of five schools selected for an in-depth analysis as part of Bike and Walk Salem's Safe Routes to Schools recommendations. (The other schools: Englewood, Hoover, and Faye Wright Elementary Schools, and Walker Middle School.)

It may be that if we are talking about "return on investment," this is a part of town where devoting a relatively greater proportion of resources will yield a commensurately greater reward.

Though the SJ piece focuses on Elementary schools, Waldo Middle School is practically co-located here, and as middle school students are significantly more independent and have better judgment than elementary schools, investments for Washington students should enjoy a multiplier effect - though if Waldo students aren't walking and biking much, it would be interesting to learn more about why there is such a difference.

In any case, maybe we need to think hard about focusing a larger proportion of investment here.

As an unintended sidebar, there's also a piece about a new bike rack dedication.

The placement is no doubt accidental, and it is nice in many ways to see two pieces on bicycling with front-section real estate.

But of course the reason the rack was being dedicated is tragic and sad.

A year and a half ago, Bersani had been bicycling on Highway 99 just north of Monmouth-Independence, and a person driving a pickup struck him from behind and killed him.

So the placement of the piece as an sort of sidebar to a piece about safety and kids walking and biking to school - well, you see the ironies.  The irony is unfortunately multiplied by the Capitol Auto Group "GoodNews" bullet:  "Recognizing positive stories that drive us forward." (The layout editor might have thought this through a little more.)

Tomorrow will be an anniversary for another sad occasion.

In Portland on October 11th, 2007, a person in a dump truck struck and killed Tracey Sparling as she was waiting at a stoplight in front of the Crystal Ballroom at Burnside.  She was a graduate of West Salem High and was attending Portland Northwest College of Art.

Though memorials in Portland got lots of press, she also has a memorial in Salem, which has gone unremarked upon in public.

In a meadow behind West Salem High there's a bench and cluster of trees.  "Tracey's Trees," some call them.

Earlier this year students were rehearsing Shakespeare there. Whether the kids knew the significance of the bench, it's hard to imagine a better expression of creativity and life, a fitter digitus impudicus to untimely death.

Hopefully, Hank's rack will also be a site for creativity and life.
Posted by Salem Breakfast on Bikes at 12:01 PM