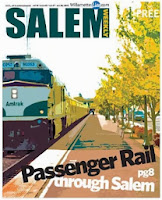 It's time to start thinking about commuter rail again.

The Oregon Passenger Rail project has an Open House coming up a week from today, on Tuesday, November 5th.

It'll be from 5pm - 7pm at the Chemeketa Center for Business and Industry on 626 High St. N.E.


As part of this project, ODOT and the Federal Railroad Administration are preparing a Tier 1 Environmental Impact Statement (EIS). This environmental review process will help ODOT and FRA make a number of important decisions, including selection of the general rail alignment and communities where stations would be located. The project will also determine several service characteristics, such as the number of daily trips, travel time objectives and the technologies to be used (for example, whether the trains will be powered by electric or diesel-electric engines).

We're beginning to see some winnowing.  At least in and around Salem, it looks like the Oregon Electric line along River Road South, Riverfront Park, and through the Highland neighborhood has been eliminated.

Still in play is a new alignment along I-5 and an old one along the current Union Pacific line that Amtrak uses.


Some Salem residents believe the rail project may cause problems for the town. Although the maps ODOT provide suggest general routes, they do not specify whether the projected new trains would travel existing Union Pacific Railroad (UPRR) tracks served by the Amtrak station at 500 13th Street, which now handles both passenger and freight trains, or if new tracks would be constructed east or west of downtown. Adding new trains to the UPRR line or to any other route that bisects the city, would mean delays for cars on city roads and impacts to neighborhoods. Currently, just six Amtrak passenger trains use the UPRR rails each day, three going in each direction.

Then there is the cost. “The feds may pay for capital investment, but not for operations,” says Salem’s Claudia Howells, who managed ODOT’s Rail Division for a little over 8 years. “Right now, Amtrak and the state are paying for their use of UPRR’s track,” which means the full cost is shared.” But, Howells says, “If ODOT ends up with a separate, passenger rail-only line, the full cost will fall on the public, and that is big money. Within the current process, I’ve yet to see that information being shared with the public. It will kill passenger rail for a generation if ODOT selects an option that the public won’t pay for and that the state can’t afford.”

Given the reluctance of legislators to increase revenues for many primary services, Howells asks, “Does anyone believe that there is money to fund a very expensive rail system?”

It's true, funding's a problem. As could be putting more trains through the middle of town.

But don't we want better rail service, less reliance on driving cars along the I-5 corridor, and less carbon pollution?

The alternative not though downtown, passenger service way out by Lancaster/I-5, wouldn't serve the Capitol or other State offices, Willamette, or other key supplies of commuters and passengers. In the top clip, note the proposed rail station at Center and I-5.  It would be more difficult for biking, walking, and transit connections instead of driving connections.

Though it would be expensive, the best concept I've heard is to put freight on new tracks that parallel I-5 (the red alignment) and to keep passenger rail on the tracks through town. I like that idea! But it's not one of the alternatives being formally evaluated, alas.  So it might just be a pipe dream.

(Maybe if we quit with the bridge and highway fantasies of the CRC and SRC we could think about seriously funding passenger rail.)

If you've been following the process more closely, maybe you know of other important details and ideas?

As someone who takes Amtrak to the Puget Sound area regularly for work/family events, I'm in favor of anything that adds more frequent train service in the Willamette Valley. It should be noted that while additional passenger service would disrupt car traffic and neighborhoods, the passenger rail trains are significantly shorter than cargo rail and typically disrupt traffic for just a few moments. Impact of passenger rail seems minimal when compared to the impact of the freight trains. Rerouting cargo to a bypass would be nice, but I think it is also unnecessary.

I didn't go to the most recent meeting of the Community Advisory Group but in the first one, connectivity for biking, walking and transit was the biggest theme. There was some discussion of high-speed rail, which was the presumed benefit of the I-5 alignment. Cost is a factor in the selection process (unlike the SRC) and some expressed some frustration that there weren't price tags to consider.

Nobody raised traffic impact as a problem. Its always out there but the Weekly piece doesn't offer any evidence this "concern".

The story says that the UP tracks carry 6 trains now. Maybe that includes freight? My understanding was that 6 passenger trains per day is the goal.

My impression is the 12th St. alignment is the expected outcome. I think it delivers the highest level of service at the lowest price and can be implemented relatively soon.

Others have suggested that the Oregon Electric line along the waterfront is the best candidate for extending the WES commuter rail from Wilsonville. That would have more local stops along the I-5 corridor (Keizer, Brooks, Woodburn) while the passenger rail would serve major city centers (Eugene, Salem, Portland)

Thanks for the additional info!