Earthquake Prep: When we can't Maintain Existing Bridges, Why $1B for Third Bridge? 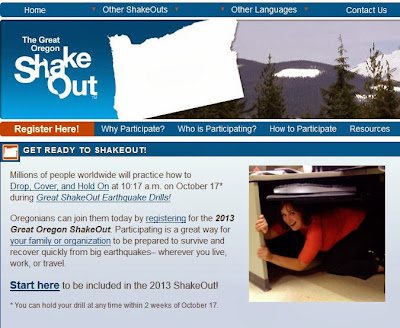 A nationwide earthquake drill is scheduled for October 17th, and lots of folks in Oregon are participating.

There's nothing wrong, of course, with focusing on individual safety.

But a lot of the problem with a large earthquake happens well after the quake itself:  Survivors need food, clean water, medical treatment - lots of things that involve the movement of people and goods.

And no amount of sheltering in place will repair broken water mains and sewer lines, trashed water treatment plants, busted up roads, and collapsed bridges.  So focusing on the micro-scale of "drop, cover, and hold" may result in more than a little bit of a pyrrhic victory.

Infrastructure is hugely important here. (And that means the scale of government, not the smaller one of private individuals and self-reliance.)

So let's talk about those bridges.

Remember the Skagit Bridge collapse? The Marion Street Bridge is in worse shape!

And lots of our smaller bridges, including many that cross Mill and Pringle Creeks and provide access to City and State Government as well as the Hospital, are at risk:

As we think about disaster preparedness, let's also think about why planning for a new $1B giant bridge and highway when we can't afford to maintain and repair our existing bridges is folly of the highest order.
Posted by Salem Breakfast on Bikes at 7:00 AM

Brilliant post SBOB. So why did Councilor Bednarz report at my neighborhood association meeting this week that the city is soliciting ideas for the use of "leftover" money from the 2008 streets and bridges bond fund? He suggested speed bumps as a potential project. Why aren't we putting as much as we can into repairing our deficient bridges?

You can see the initial long-list of projects ($36M worth) here. (The list has to be narrowed to $8M.)

If we started with values, we might say that the biggest risks are climate change, earthquake, and flood - so what transportation projects do we need to undertake for prevention and mitigation?

In this light I think facilities for people who walk and bike would score highly. The preference here is that we allocate funds in ways that creates a genuine suite of transportation choices for people - and encourages movement away from the sole reliance on drive-alone trips. Allocating all of the surplus to bridge repair may not accomplish this.

Bridge stuff is more also expensive, and their repairs may not be being discussed much because they would likely suck up the $8M very quickly.

But you ask a very good question. Why are we throwing darts instead of thinking strategically?

But you ask a very good question. Why are we throwing darts instead of thinking strategically?

Please read "On the folly of hoping for A while rewarding B," a true classic of management literature that is equally applicable to public administration.